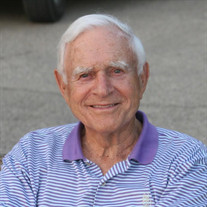 Harry Walker Wellford, a third-generation Memphian and long-time federal district and appellate court judge, died peacefully at home surrounded by family and friends on April 17, 2021, at the age of 96. Harry is survived by his five children... View Obituary & Service Information

The family of Judge Harry Walker Wellford created this Life Tributes page to make it easy to share your memories.

Send flowers to the Wellford family.