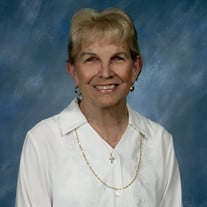 Helen Clark “Mimi” Richardson, passed away Saturday, January 25, 2020, at her home in Memphis, surrounded by her family and friends. Mimi, a lifelong Memphian, was born on August 30, 1923, in Jonesboro, AR while her parents were visiting relatives. She graduated from Sacred Heart High School in Memphis, and after graduation, she worked at Chicago and Southern Air Lines, which later became Delta Airlines. After raising her children during their first ten years of life, Mimi worked at WMC, Channel 5 and WHBQ, Channel 13 until she retired at age 82. After several years of retirement, she volunteered at a local hospital for five years. She was preceded in death by her husband, August Fred Richardson. She leaves behind two loving children, Aodhan “Rick” Richardson (Rae), and Kriste Richardson Cull (Tony). She also leaves four grandchildren; Jason, Karen, Katie, and Katherine, and seven great-grandchildren; Olivia, Sam, Cecilia, Mia, Amelia, Allison, and Zoe. She leaves behind many nieces and nephews and many friends of Kristie’s and Rick’s who lovingly viewed Mimi as their “Udder Mudder.” Throughout her life, Mimi was the essence of unconditional love and acceptance. She was a person who saw every small discomfort as well as every tragedy as just another obstacle that she would and did overcome. Over the years, Mimi touched the lives of hundreds of people with her love, friendship, kindness, support, loyalty, and her screamingly-funny sense of humor. Mimi was a rabid fan of the Memphis State University/University of Memphis Tigers basketball team, and she often watched the game sitting next to her friend, Big Jack Eaton, as he called the games on the radio. With Mimi’s passing, the Tigers lost one of their biggest supporters. Visitation will be Friday, January 31, 2020, at 9:00 AM at St. Anne Church, 706 S Highland St, Memphis, TN. A Mass of Christian Burial will be celebrated at 10:00 AM at St. Anne. Following Mass, interment will be at Calvary Cemetery Mausoleum, 1663 Elvis Presley Blvd., Memphis, TN. Lunch and visitation in celebration of Mimi’s life will be held at the Joachim Center at St. Anne Church immediately following interment at Calvary. The family requests that in lieu of flowers, donations be made to Catholic Charities of West Tennessee, 1325 Jefferson Ave., Memphis, TN 38104, or to a charity of the donor’s choice.

Helen Clark &#8220;Mimi&#8221; Richardson, passed away Saturday, January 25, 2020, at her home in Memphis, surrounded by her family and friends. Mimi, a lifelong Memphian, was born on August 30, 1923, in Jonesboro, AR while her parents were... View Obituary & Service Information

The family of Helen Clark Richardson created this Life Tributes page to make it easy to share your memories.

Send flowers to the Richardson family.