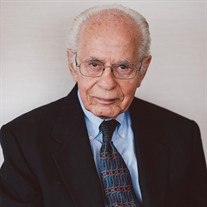 Helio Lemmi, M.D. Helio Lemmi, M.D., age 90, died peacefully on December 15, 2019. He was born in Sao Paulo, Brazil to Ascanio and Nair de Souza Lemmi on June 2, 1929. He was preceded in death by his wife, Anne Huntley Lemmi. Dr. Lemmi attended medical school in Brazil and trained as a Neurologist at the University of Alabama, Birmingham(UAB). During his career as a neurologist, he authored or coauthored over 90 articles in medical journals and was a global leader in sleep research. In 1977, he founded and directed the Sleep Disorders Center at Baptist Memorial Hospital, which was one of the first in the nation. He also chaired the National Accreditation Committee for Sleep Disorders Centers. He served on the Boards of Baptist Foundation and Epilepsy Foundation of West Tennessee and as president of the Southern Sleep Society. Dr. Lemmi also served as Clinical Professor of Neurology at UTHSC Memphis. Dr. Lemmi received numerous awards including the Kleitman Distinguished Service Award from The American Sleep Disorders Association, now the AASM, and the 2010 Pillar Award of Distinction for Emeritus Physicians from Baptist Hospital. He was the proud recipient of the Golden Apple Award for teaching, which was voted on by the UT medical students. He was a devoted husband and loving father, as well as a beloved grandfather and great grandfather. He enjoyed traveling and introduced all four grandchildren to travel in Europe and South America. He is survived by a daughter, LaDonna Falwell (Dr. Stephen) of Cumming, Georgia and a son Dr. Michael Lemmi (Sherri) of Memphis; two granddaughters, Stephanie Raymond (Scott) of Cumming, Georgia and Dr. Catherine Lemmi (Chika Nii) of San Francisco; two grandsons, Nicholas Falwell of Pittsburgh and Alan Lemmi (Amanda) of Baton Rouge; and five great grandchildren, Ella Raymond, Livy Raymond, Langston Falwell, Elliot Nii Lemmi and John Lemmi; as well as a brother, Ivo Lemmi and two nephews Victor and Caio, all of Brazil. Visitation will be Saturday, December 21, 2019 at Canale Funeral Directors from 10:00 to 11:00 a.m. followed by a memorial service. Burial will follow at Elmwood Cemetery. In lieu of flowers donations may be made to Baptist Memorial Health Care Foundation or St. Jude Children's Research Hospital.

The family of Dr. Helio Lemmi created this Life Tributes page to make it easy to share your memories.

Send flowers to the Lemmi family.