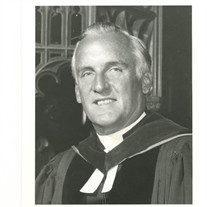 Reverend Doctor Henry Blaine Strock, Jr. passed away peacefully on May 23, 2020. Born in Greensburg, Pennsylvania in 1927, Henry was the son of Reverend Henry Blaine Strock, Sr. and Katharine Reiley Strock. Henry graduated from Princeton University in 1949 and Princeton Theological Seminary with a Master of Divinity and a Master of Theology in 1952. He received his Doctor of Ministry from McCormick Theological Seminary. Dr. Strock began his ministry at Northminster (Central) Presbyterian Church in New Castle, Pennsylvania. He went on to serve three other large congregations; Wyoming Presbyterian Church in Millburn, New Jersey, First Presbyterian Church in Sharon, Pennsylvania, and Idlewild Presbyterian Church in Memphis, Tennessee. While serving as a pastor in Pennsylvania, he created a program called Risk Evangelism, which later was used throughout the Presbyterian Church USA denomination. Henry also served as Moderator of various Presbyteries in both the north and south. After his retirement in 1991, he served as interim pastor in eleven more churches for the next fifteen years. His family always delighted in Henry’s deep faith, steadfast counsel, and witty sense of humor. One of his proudest accomplishments was becoming an Eagle Scout for which he was given the split bamboo Divine Fly Rod, that he enjoyed throughout a lifetime of trout fishing. Henry is survived by his wife of sixty-seven years, Lois Hayes Strock and his four children; Beth Himes, Deb Strock-Kuss (Randy), Blaine Strock (Cindy), and Peggy Stephens (Hugh). He had nine grandchildren; Chris Himes (Emily), Andrew Himes, Georgia Kuss, Blaine Kuss, Steve Strock (Wilmarie), Claire Julian (Bill), Allie Eick (John), Elizabeth Ford (Patton), and Hugh Stephens, III. He was blessed with nine great grand-children; Luther and Marco Himes, Sofia Strock, Henry, James, and Peter Eick, and Taft, Louise, and Patton Ford. During this time of social-distancing, family will gather for a private service. A memorial service for family and friends will follow later this summer at Idlewild Presbyterian Church. In lieu of flowers, memorials may be made to Idlewild Presbyterian Church.

The family of Rev. Dr. Henry Blaine Strock Jr. created this Life Tributes page to make it easy to share your memories.

Send flowers to the Strock family.