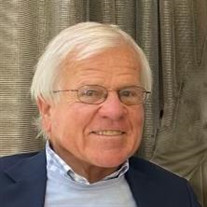 Howard Kreider Tayloe, Jr. August 28, 1946- February 2, 2022 Howard Kreider Tayloe, Jr., affectionately known as Chip, was born in Memphis on August 28, 1946. Chip attended Presbyterian Day School, Memphis University School and graduated from Central High School in 1964, where he played football. He was a 1968 graduate of Washington and Lee University in Lexington, Virginia where he made many cherished friendships and was a member of the SAE fraternity and the Sigma Society. Chip served in the United States Navy as a Naval Intelligence Officer in Keflavik, Iceland after he was commissioned at the Naval Officer Candidate School in Newport, Rhode Island. In 1975 he founded The Tayloe Company, a successful home building and real estate development business for almost 50 years with the core values of honesty, integrity, respect, quality and fairness. With his commitment to excellence and eye for design and detail, Chip was admired and appreciated by both his clients and contractors. He was a member of the West Tennessee Home Builders Association and served on the board for many years. Chip’s joyful exuberance, quick wit, twinkling smile and enthusiastic interest in others endeared him to all ages! Wherever he went he always made sure to know everyone’s name, and he delighted in the camaraderie of both friends and acquaintances! Chip enjoyed nature and the great outdoors, hunting, and golf. He was also an avid reader of history and an accomplished card player. But, above all, Chip was devoted to his family, always making treasured memories with love and laughter! He and Louise, “Dedaddy and Memommy”, were known for attending countless sporting events for their children and grandchildren and celebrating every family milestone! Chip is survived by his devoted wife of 53 years, Louise, sons, Howard Kreider “Trip” Tayloe III (Jana) and William Roberts Tayloe (Kimberly), daughter, Louise Langston Tayloe, six adored grandchildren, William Roberts Tayloe, Jr., Juliet Claire Tayloe, Henry Byars Tayloe, Howard Kreider Tayloe IV, Katherine Hampton Tayloe, and Louise Lackie “Lele” Tayloe , a sister, Katherine Tayloe Collins (Kalamazoo, MI) , sister-in-law, Nina Hammond Tayloe and many wonderful nieces, nephews and extended family. He was preceded in death by his parents, Nancy Bond Tayloe and Howard Kreider Tayloe and his brothers, Robert Bond Tayloe and George Green Tayloe. Throughout recent years Chip persevered as a pillar of courage and fortitude during his long battle with cancer. “I have fought the fight, I have finished the race, I have kept the faith.” II Timothy 4:7 The family wishes to thank his many doctors, especially Dr. Kurt Tauer, West Cancer Center, and Dr. Nizar Tannir, M D Anderson. Chip was a member of St. John’s Episcopal Church where a visitation will be held on Wednesday, February 9th at 10:00 with a memorial service at 11:00, followed by burial at Elmwood Cemetery. If you wish to honor Chip with a memorial gift please donate to the Neighborhood Christian Centers, 785 Jackson Avenue 38107, St John’s Episcopal Church, 3245 Central Avenue 38111 or the charity of your choice.

The family of Howard (Chip) Kreider Tayloe Jr. created this Life Tributes page to make it easy to share your memories.

Send flowers to the Tayloe family.