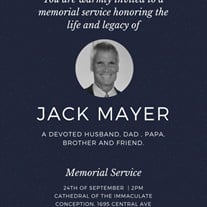 Jack W. Mayer, 67, a loving husband and father of three children peacefully went to his heavenly home surrounded by his family Tuesday December 15, 2020 in Memphis, Tennessee. A fourth generation and life-long Memphian, Jack was born on November 22, 1953. Growing up, he was proud to be a part of the Boy Scouts of America and earned the highest achievement of Eagle Scout. He had a passion for boxing and was the Golden Gloves City Champion in 1972. Jack was honored to play on the Christian Brothers High School football team and be mentored by Coach Tom Nix. He graduated from the University of Memphis in 1977 and began his hard-working 40-year career as a financial advisor at Morgan Keegan. Jack was devoted and passionate about each and every client and loved working alongside his son Rob for the past 12 years at Hilliard Lyons and Stifel. Jack married the love of his life Katherine with whom he lived happily with for 29 beautiful years, and they loved attending both Immaculate Conception and Christ United Methodist Church. He loved serving the city of Memphis and was an active Board Member for Christian Brothers High School, The Humane Society of Memphis, The University Club, and was proud to serve as the President of the Shelby County Drug Court Foundation. Jack had the vision and successfully organized one of the Drug Court’s biggest fundraisers “Knockout: A Fight For Life” where he brought his friend, former Heavyweight Champion Smokin’ Joe Frazier to box Mayor Willie W. Herenton. The event raised over $100,000 for the Shelby County Drug Court Foundation. Jack was so humbled to accept his inductions into both the Shelby County Drug Court Foundation Hall of Fame and The Christian Brothers Hall of Fame, both places he found great joy in serving. Jack was not only a hard worker, but a man who always put his family first. He enjoyed being Papa to his grandkids by taking them on adventures and showering them with prizes and “Papa” drinks. He taught every one of his kids and grandkids to throw and catch a football and loved watching college football with them. Jack especially found great joy in his traditions of going above and beyond to make sure his family always had a fun Halloween and a wonderful Christmas. He is the only man that can work out twice a day and eat a whole Kay Bakery sheet cake on the weekends. He was also a great speaker and story-teller. He always will be known as a self-less, loving, and devoted husband and father who loved and fought hard to take care of his family well, the Jack Mayer way. In addition to his wife Katherine Mullins Mayer, he is survived by his two sons Rob Mayer (Emily) and Bryan Mayer (Nicole), and his daughter Helen Mayer. He was a devoted Papa to his three grandsons Drew Mayer, James Mayer, and Davis Mayer. Papa was very excited about his first granddaughter arriving at the end of the year. He was an older brother to Mary Horner (Frank), Patty Hill (David), and Ward Mayer (Jane), brother-in-law to Kevin Walsh (Linda) and Will Mullins (Ashley), uncle to Paul Johnston (Noelle), Lonnie Hill, and John Walsh and son-in-law to William Mullins (Dianne). Jack was preceded in death by his father Frederick John Mayer, his mother Anne Patricia Mayer, his sister Elaine Mayer Walsh, and his mother-in-law Barbara Helen Mullins. His family is so touched by all the sweet condolences of his life well-lived. There will be a private family burial service and his family will plan a beautiful mass and celebration of Jack’s life in 2021. The family requests any memorials be sent to The Shelby County Drug Court Foundation or a charity of the donors' choice.

The family of Jack Welsh Mayer created this Life Tributes page to make it easy to share your memories.

Send flowers to the Mayer family.