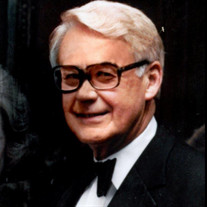 James Hallam (Hal) Boyd, Jr. of Memphis, Tennessee died May 7, 2021 after a courageous battle with lung cancer. Hal is survived by his wife Ann, son Hal Boyd, III and his wife Allyson and his two grandsons Hal Boyd, IV and Battle Boyd. He is also survived by his sister Irene Roosevelt Aitken of New York, NY and his brother-in-law Cole Wilder. Hal was born in Memphis on February 21, 1928, the first child of Mr. and Mrs. James Hallam Boyd. He began his early education at the Pentecost-Garrison School. After spending some of his childhood years in Chattanooga, he graduated from The Hotchkiss School in Connecticut and Yale University. He earned an A.B.A. degree from the National Graduate Banking School, Northwestern University. During his years at Yale, Hal served four years of service as a 1st Lieutenant, Artillery in the United States Army. After graduating from Yale, he took a management position with Ford Motor Company and subsequently Firth Carpet Company in New York. In 1960, he married the love of his life, Ann Wilder of Memphis, Tennessee. Last year, they celebrated their 60th wedding anniversary. After moving to Memphis in 1964 with Ann, he began his career in banking at Union Planters Bank and spent 30 years with the National Bank of Commerce as Senior Trust Officer. Hal was an active leader in civic affairs in Memphis and the State of Tennessee. He served as an Officer and Director for The Memphis in May Association, Division Chairman for the United Way, Chairman for the Memphis Heart Association, and Director of The Tennessee Heart Association. Hal was a member of the Chancellors Roundtable at The University of Tennessee, Memphis and a member of Memphis Rotary Club, serving as a Director for two terms. He served on the Board of Trustees of Dixon Gallery and Gardens, Plough Foundation and Trezevant Manor and The Allen Morgan Nursing Home. He was a member of The Memphis Country Club, serving as president from 1986-1988, a member and Director of Memphis Hunt and Polo Club, Sprouting Rock Beach Association and Clambake Club of Newport Rhode Island and John’s Island Club of Vero Beach, Florida. Hal was King of Cotton Carnival in 1977. Hal Boyd loved the game of golf. He would be the first to say that the game sometimes did not love him back with equal passion. He delighted in the skill of his son and grandsons on the links and adored the time with them. Hal was an avid outdoorsman who relished duck and dove hunts at these two infamous hunting clubs: De Sank in Chatfield, Arkansas and Old Buzzards in Webb, Mississippi. For 35 years, Hal held the Bermuda Fishing record for the largest bone fish. Hal loved and was well loved by his family and friends. Hal Boyd, “Bun,” Dad, Granddaddy…you will be sorely missed. Services are entrusted to Canale Funeral Directors of Memphis. A graveside service will be held at St. John’s Cemetery at 11:00 a.m. on Monday, May 10th. In lieu of flowers, donations may be made in Hal’s honor to St. John’s Episcopal Church (3245 Central Avenue, Memphis, TN 38111) or to Dixon Gallery and Gardens (4339 Park Avenue, Memphis, TN. 38117).

The family of James "Hal" Hallam Boyd Jr. created this Life Tributes page to make it easy to share your memories.

Send flowers to the Boyd family.