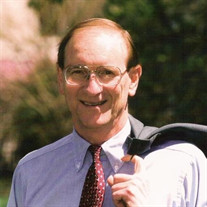 On October 3, 1933, James S. (Jim) Gilliland was born in Memphis to parents Elizabeth and Frank M. Gilliland. Jim joined his older brothers, the late Robert J. (Bob) Gilliland and Frank M. Gilliland. Jim began his early schooling in Memphis and later graduated from Webb School at Bell Buckle, Tennessee. He was an honors graduate of both Vanderbilt University and Vanderbilt Law School, the latter at which he served as Associate Editor of the Law Review and was named by his peers as the Most Outstanding Graduate of the Law Class of 1957. With the bar exam behind him, he served in the Navy for four years in the Pacific and Far East. The greater part of his work involved serving as the full time prosecutor, and then as chief defense counsel, for the Navy-Marine General Court Martial System for the Far East. Following a stint of world travel in 1962, Jim returned home to Memphis where joined the then seven lawyer firm now known as Glankler Brown, PLLC. He became a name partner and remained with the firm for thirty years. By 1964 Jim was fortunate enough to have met and married Lucia Flowers. Three children soon followed. In addition to the practice and his family, Jim’s community life was extensive: he chaired the Liberty Bowl, the Memphis Cotton Carnival, the Memphis Arts Council, and LeMoyne-Owen College boards. Jim also chaired the Memphis Mayoral Transition Committee (as transition lead for the city’s first African American Mayor). He was the recipient of the Memphis Bar’s Sam A. Myar Jr. Award as its most outstanding young lawyer in 1972; and, in 1995, baseball legend Hank Aaron presented Jim with the United Negro College Fund’s highest regional award — the “Beacon of Hope” Award — for his work in support of minority education. In 1993, Jim Gilliland was nominated by President Clinton and confirmed by the U.S. Senate as the General Counsel of the Department of Agriculture [USDA] where he was responsible for the Department’s law and legal policy and managed a legal staff of some 200 lawyers in 23 offices around the nation. His diverse work there, as he once observed, “was not about pigs and chickens,” but covered the broad array of domestic and international issues involving America’s food, forest, agriculture and small town interests. His office oversaw a loan portfolio which in size was second only to Citicorp; this included some some 750,000 single family homes; international, utility, and development loans; and it also handled the nation’s national forest use and environmental cases. He was involved in virtually every significant decision made by the Department on all policy matters involving the nation’s rural development, agriculture, nutrition and national forest matters, not to mention oversight of a running inventory of some 5,000 active legal cases. Returning to Memphis after this second federal service, Jim continued to be actively involved in local and national boards, nonprofit and profit, including the advancement of the health law initiatives of the University of Memphis Law School, initiating and instituting Tennessee anti-predatory legislation, as well as serving as Chair of the board of the American Battlefield Trust (private partner of National Park Service focused to preserve American battlefields). He was a board member of The Environmental Law Institute, the Institute of Human Origins, The M.K. Gandhi Institute for Non-Violence,and Living With Wolves. He received numerous awards over the years including ones from the Planned Parenthood - Memphis Health Center, Graduate School USA (formerly referred to as the Graduate School, USDA), and a Pillars award from the University of Memphis Law School. He leaves his wife of 55 years, Lucia Flowers Gilliland, daughters Katherine G. Connell (Coleman) and Elizabeth J. Gilliland, and a son, James S. Gilliland, Jr. (Kathryn). He is also blessed with eight grandchildren: Gil Humphreys, Alex Humphreys, Kate Connell, Elizabeth Wood, Sabine Wood, Evan Gilliland, Walt Gilliland and Jordan Gilliland. He also leaves nieces and nephews as well as lifelong friends, many who fished together every spring in Arkansas. Visitation will be held Sunday, March 1, 2020 at the University Club of Memphis from 3:00 -6:00 p.m. A private burial for the family will follow at a later date. In lieu of flowers, the family requests that any donations be made to The Overton Park Conservancy or the organization of one’s choice.

The family of James (Jim) Sevier Gilliland created this Life Tributes page to make it easy to share your memories.

Send flowers to the Gilliland family.