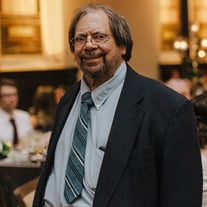 James (Jimmy) Sherman Brignole, 68, passed away on February 21st, 2022. Jimmy was born and raised in Memphis, TN, and he was a long-time resident of Bartlett. Jimmy attended Memphis Catholic High School and graduated from Memphis State University, where he earned a Bachelor of Science in Mechanical Engineering. As a Mechanical Engineer, Jimmy worked at Firestone, The US Postal Service, and most notably he spent the majority of his career working at FedEx. There, Jimmy played an essential role in the development of the Indianapolis and Paris Hubs starting in the 1990s. His passion for engineering went well beyond his role at FedEx as he enjoyed tinkering with, repairing, and learning about new gadgets, especially following his retirement. Jimmy was happiest when his four daughters were all together visiting him in Memphis. He enthusiastically transitioned into the role of a grandfather in 2018, and he enjoyed spoiling his three grandchildren. Jimmy loved to travel, cook, garden, collect coins, and care for the "critters" of his yard. It was no secret that he had a soft spot in his heart for animals, and he fiercely loved his cats, BK and Oliver. He was known for his sense of humor and making others laugh- never leaving a room without making a joke or telling a funny story. Jimmy also admired the arts, particularly live theater. He spent many years as a season ticket-holder at Theater Memphis and passed his love for the arts to his daughters. Throughout his life, Jimmy grew in his faith and was a devoted Catholic as a member of St. Ann parish and then St. James parish. Jimmy is preceded in death by his father and mother (Anthony and Mary) and his brothers (Sonny and Ronnie). He is survived by his sisters (Rita and Theresa), his four daughters (Sarah, Laura, Amy, Tracey), and his three grandchildren (Bennett, Molly, Reese). A visitation will be held at 11:15am at St. James Catholic Church on Friday, March 4th 2022. A Funeral Mass will immediately follow at 12:00pm. In lieu of flowers, the family requests donations to the Catholic Diocese of Memphis and prayers on Jimmy's behalf. Additionally, Jimmy's girls request that you enjoy a bag of Skittles, as they were his favorite snack, and he was rarely found without a few loose ones in his pocket.

The family of James (Jimmy) Sherman Brignole created this Life Tributes page to make it easy to share your memories.

Send flowers to the Brignole family.