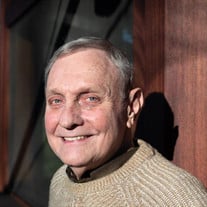 James Kenneth Hartsfield (Ken) passed away Friday, April 24 at the age of seventy-four. He was preceded in death by his Wife, Jill McDonald Rule Hartsfield who passed away in December 2017. He is survived by Jill’s sister, Cheryl Kent, her brother, Kenneth A Rule, M.D., and his beloved cat, Flipo. Ken was born August 27, 1945, to hard-working, loving and devoted parents who lived through the Great Depression. He described them as ‘The best parents, really the salt of the earth’. They taught Ken to make do with what he had and fostered a curiosity about fixing things which continued with him throughout his life. After graduating college with a double major in English and Philosophy, he began working in a residential and light commercial renovation business. He continued in that role from 1975 to 1990. In 1989 he founded the commercial architectural millwork company, Memphis Millwork. The business, which he sold in 2002, was quite successful and remains so thirty years later. Ken met Jill, his ‘true soul-mate’ in 1982 and they married in 1988. Ken and Jill loved their family, their home, their friends, and entertaining. Ken was one of the founders of a Midtown ritual, The Annual Rites of Spring and managed and hosted the event for forty-eight consecutive years. Ken was a lover of music. He believed music gave soul to the universe, wings to the mind, flight to the imagination, and charm to life. He was a master designer who was able, through his projects, to express imagination, potential for creation, and the vision through which he framed the world. A celebration of Ken’s life will be held in the future. Suggested donations: St. Jude Children’s Research Hospital, 501 St. Jude Place, Memphis, TN 38105 Donate by Phone 1-800-822-6344

James Kenneth Hartsfield (Ken) passed away Friday, April 24 at the age of seventy-four. He was preceded in death by his Wife, Jill McDonald Rule Hartsfield who passed away in December 2017. He is survived by Jill&#8217;s sister, Cheryl Kent,... View Obituary & Service Information

The family of James (Ken) Kenneth Hartsfield created this Life Tributes page to make it easy to share your memories.

Send flowers to the Hartsfield family.