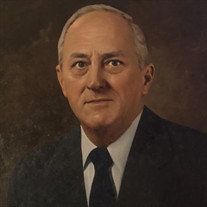 James A. Kinney, lifelong Memphian, was born in Memphis, TN April 24, 1926 at St. Joseph’s Hospital. He attended Central High School and received his bachelor’s and law degree from the University of Memphis. Jim’s love for his family and role as husband, father, grandfather, and great-grandfather gave him the most joy. He was married to Jane Alexander Kinney, the love of his life, for over 70 years. Jim retired from First Tennessee Bank in the late 1980s after 35 years of service as Executive Vice President and manager of the Corporate Banking Group. He also participated in a number of charity organizations and nonprofit groups. He served as past president of The Liberty Bowl and a member of the selection committee. He also served as Chancellor of the March of Dimes for several years. Jim Kinney was Adjunct St. Jude Board of Governors for 35 years; he served in an emeritus capacity up to his death. He also served for many years as a member of the Memphis and Shelby County Board of Industrial Development. Jim served his country as a U.S. Marine in WWII in the Pacific theatre and in Korea as a 1st Lieutenant. In Korea, he was wounded on 2 separate occasions on the same day and was awarded a Purple Heart. Jim is survived by his wife Jane, two sons, Ray Kinney (Julie) and Wes Kinney, and seven grandchildren, Carrie Gann (Chris), Ray Kinney (Mary Margaret), Jeff Kinney, Zan Kinney (Eve), Aubrey Thomas (Kelly), Katie Kinney, and JAK Kinney; and great-grandchildren Hyson and Hunter Smith, Elizabeth Anne and Alexander Kinney, Maitland and Evann Gann, and Henley and Delaney Thomas. He was preceded in death by his parents, his son, James Andrew Kinney, Jr., his brother George V. Kinney, and his sister Mary Louise Phillips. Private services will be held. The family request, that in lieu of flowers, any memorials be sent to St. Jude Children's Research Hospital.

James A. Kinney, lifelong Memphian, was born in Memphis, TN April 24, 1926 at St. Joseph&#8217;s Hospital. He attended Central High School and received his bachelor&#8217;s and law degree from the University of Memphis. Jim&#8217;s love for... View Obituary & Service Information

The family of James A. Kinney Sr. created this Life Tributes page to make it easy to share your memories.

Send flowers to the Kinney family.