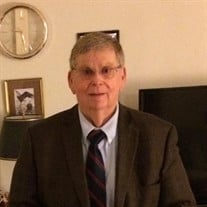 James (Jimmy) Robert Pate, Jr., 75 of Memphis, Tennessee died on November 10, 2021 at Baptist Hospital after a short illness. He was born on July 19, 1946 to James Robert Pate, Sr. and Laura Jane Stovall Pate at St. Joseph Hospital in Memphis. Jimmy attended Blessed Sacrament Elementary School and Catholic High School for Boys, graduating in 1965. He attended Draughon’s Business College and in 1966 joined the Navy. He served for two years with active duty in Viet Nam, attached to a Marine Division. After his discharge, he was chosen as a member of the jury that tried James Earl Ray. He married Betty Louise Thompson on December 30, 1972 at Sacred Heart Church in Memphis. They met at their Senior Prom and Jimmy prayed to St. Jude that he would be able to find Betty again. Seven years later, their paths did cross on a blind date and they married six months later. They have one son, James Robert Pate, III. For most of his adult life, Jimmy worked in the Termite and Pest Control Business, eventually owning his own company, Pate’s Pest Control. Jimmy was a man of strong Catholic faith, and loving husband, father, and grandfather. He was a Fourth Degree member of the Knights of Columbus and involved with the community as President of the Police Ambassadors at the Tillman Station in Memphis. He supported the work of Birthright of Memphis, receiving the Peter Drott, Friend for Life Award in 2008. He was an avid fan of the St. Louis Cardinals and the Memphis Tigers Football and Basketball teams. He is survived by his wife, his son, daughter-in law, Carrie, and two granddaughters, Louisa and Charlotte, all of Shepherdstown, West Virginia. Jimmy leaves behind many relatives and friends to cherish the memories of his life. He was preceded in death by his parents, his brother, Frank J. Rossi, and his sister, Ester Rossi Brandon. Visitation will be 4-6 p.m. Tuesday, November 16 at Canale Funeral Directors. The funeral Mass will be celebrated at 10:00 am on Wednesday, November 17 at Blessed Sacrament Catholic Church with burial following at Calvary Cemetery. The family requests donations be sent to St. Jude Children’s Research Hospital or Birthright of Memphis.

The family of James Robert Pate Jr. created this Life Tributes page to make it easy to share your memories.

Send flowers to the Pate family.