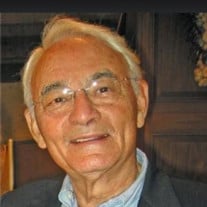 James Connell Rainer, III, passed away August 6, 2020 at the age of 87. A native Memphian, Jim attended high school at The Lawrenceville School in New Jersey, where he was president of his class. He graduated Phi Beta Kappa from the University of Virginia, where he was a member of the Raven Honorary Society and Sigma Alpha Epsilon Fraternity. Following college, he joined the U.S. Army and was stationed in Mannheim, Germany, where he served as a radio operator. In 1956, he married Lawrence Cook, the mother of his four children, who passed away in 1995. In 1998, he married Virginia Self, who passed away in 2016. Among other business interests and before starting his own company Rainer and Co., Jim developed homes in West Memphis and worked for Northwestern Mutual Life Insurance and Dunavant Enterprises. He served on many boards including Hutchison School, Memphis University School and St. George’s School. As a lifelong member of St. John’s Episcopal Church, he experienced many important family events within the church walls and served on numerous committees and as Senior Warden of the Vestry. He was passionate about aviation, earning his pilot’s license at the age of 20, and was involved in many local aviation endeavors. Known to be an excellent pilot, he shared those resources through the Angel Flight program by providing air transportation for those who needed to travel to receive lifesaving medical treatment but lacked the means. Above all, Jim loved his family and spending time with them. They adored him and knew him only as a loyal, caring and humble man. In addition to Lawrence and Virginia, he was predeceased by his parents James Connell and Gwyn Rainer and his sister Gwyn Rainer Foote. He is survived by his sister Nell Levy and his children Lesley Dillon (John), Jim Rainer, IV (Missy), Stephen Rainer (Debra), Andy Rainer (Keith); grandchildren Lawrence Alexander (Brent), Johnny Dillon (Megan), Jim Rainer, V (Faye), Alex Rainer (fiancée, Grace), Peter Rainer, Wil Rainer, Daisye Rainer, Stephen Rainer, Jr. (Ashleigh), Paige Dye (Chance), Drew Rainer, Nelle Rainer, Robert Rainer, Mary Lawrence Rainer, four great-grandchildren and another on the way. He is also survived by his stepchildren Peyton Self (Marge), Mary Louise Sinclair (Robert), Ginny Terry (Cooper) and their children and grandchildren. A private funeral service will be held on Wednesday at St. John’s Episcopal Church. The family requests that any memorials be sent to St. John’s, 3245 Central Avenue, Memphis, TN 38111.

James Connell Rainer, III, passed away August 6, 2020 at the age of 87. A native Memphian, Jim attended high school at The Lawrenceville School in New Jersey, where he was president of his class. He graduated Phi Beta Kappa from the University... View Obituary & Service Information

The family of James Connell Rainer III created this Life Tributes page to make it easy to share your memories.

Send flowers to the Rainer family.