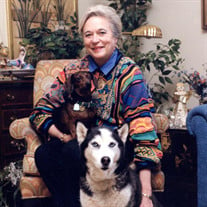 Carolyn Jane Johnson Barton was born September 5, 1935 in Memphis, TN to Dr. Harry and Merle Phipps Johnson and passed away at her home on May 27th at the age of 86. A life long Memphian, Jane graduated from The Hutchison School, and attended Southwestern at Memphis (now Rhodes College). It was there that the young beauty caught the eye of Frank Barton, Jr. They married when Jane was still a teenager, and were married for 48 years. Together they reared three sons. Jane enjoyed entertaining and travel. She spent many happy weeks at the beach, trips to Aspen, Colorado, and enjoyed many cruises through the Caribbean. She particularly enjoyed her pictorial safari to Africa, often wishing she could go back again. Interestingly, Jane was as at home in a dove field (and occasionally a duck blind) as she was in more elegant surroundings. On one particular dove hunt Jane outshot Frank, prompting him to schedule a shooting lesson immediately. She also exhibited a love for volunteer work. She was an active member of The Junior League of Memphis, and served as its President in 1973-74. Her love of cooking led her to volunteer in the Waffle Shop kitchen at Calvary Church during the Lenten season for over 50 years. She famously made the mayonnaise there, a dollop of which garnished nearly every savory dish on the menu. Jane was also a dedicated volunteer at The Woman’s Exchange. A known excellent cook, Jane entertained often. She particularly enjoyed Monday Night Sports dinners at home with Frank and the many friends who would gather with them. The sporting event always took a back seat to whatever delicacy Jane prepared. Perhaps her greatest happiness came by way of her beloved Monteagle Sunday School Assembly cottage. There, she entertained friends, family, and friends of friends and family. Everyone was welcome on her porch and around her table. She hosted “Camp Grandmother” for eight weeks every summer. Her grandchildren delighted in the games, friendships and freedom that a summer in Monteagle afforded them. After his first week at camp grandmother her younger grandson happily informed his parents, “I’m never coming home.” Jane was a beloved figure in Monteagle, cruising the grounds in her golf cart, always a beloved dog riding shotgun. She was a member of Calvary Episcopal Church, The Memphis Country Club and The Junior League of Memphis. Jane was predeceased by her parents, her brother Harry Johnson, and her husband Franklin Gustavous Barton, Jr. She is survived by her sons: Franklin Gustavous Barton, III (Lynn), Keithley Johnson Barton (Julie), and Clarke Phipps Barton (Amy). She leaves her grandchildren: Franklin Gustavous Barton, IV (Tara), Rachael Barton Ruud (Sheldon), Keithley Johnson Barton, Jr. (Carolyn), Grace Anne Barton and Katherine Louise Barton, and great-grandsons Franklin Bradley Barton and Nolan Coe Ruud. In lieu of flowers, the family requests donations be made to Calvary Episcopal Church, Monteagle Sunday School Assembly, or a charity of the donor’s choice. The family will hold a visitation at Calvary Church Thursday, June 2nd, at 10:00. A memorial service will be held at the church at 11:00. The burial will be private.

Carolyn Jane Johnson Barton was born September 5, 1935 in Memphis, TN to Dr. Harry and Merle Phipps Johnson and passed away at her home on May 27th at the age of 86. A life long Memphian, Jane graduated from The Hutchison School, and attended... View Obituary & Service Information

The family of Jane Johnson Barton created this Life Tributes page to make it easy to share your memories.

Send flowers to the Barton family.