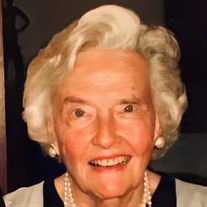 Jane Clay Cash is celebrating in Heaven after joining her Lord and Savior just two weeks shy of her 95th birthday. She passed away suddenly, yet peacefully, this past Sunday morning, January 2, 2022 and will be remembered fondly as the flower lady at Second Presbyterian Church, an entertaining grandmother, a great friend to many of all ages, and one who lived a life full of color. Jane was born on January 16, 1927 to the late James Nelson Clay, Jr. and Kathleen Wilkinson Clay in Memphis, Tennessee where she resided for her adult life. She attended Queen’s College in Charlotte and Southwestern at Memphis (Class of 1949) where she was a member of Chi Omega Sorority. She worked as a flight attendant for Chicago and Southern Airlines and then at the predecessor of the current law firm Glankler Brown PLLC.. In 1951 she married the late Charles Rufus Cash, Jr. and embarked on a 56 year career as a wife and mother, or, as Jane liked to say , “a domestic engineer.” Jane was a member of the Grandview Garden Club, Le Bonheur Club, Le Bonheur Travel Study Club, and for many years was the Chi Omega Recommendations Chairman for the Memphis area. She joined Second Presbyterian Church in 1952 and later founded the Chancel Guild, the church’s flower ministry, which continues to this day. In 1994 she received the Outstanding Christian Service Award, presented by the Women of the Church. Jane was a longtime supporter of Trezevant Manor, where she resided during the last twelve years of her life. She is preceded in death by her husband Charlie. She is survived by her brother James Nelson Clay III, her three daughters Cynthia Clay Cash, Catherine Clay Cash (Bruce McRoy), Marguerite Cash Davis (Norwood Davis); her three grandchildren Evelyn Plumb Bush (Jonathan Bush), Joseph Charles Plumb III, Clay Davis McKenna (Jay McKenna); her four great grandchildren Philipa Matthis, Finnegan Matthis, Oakley Bush, Clayton Bush; and her beloved lifelong friend Josephine Blaylock. A private graveside service is planned at Elmwood Cemetery and a Celebration of Life will be held in the springtime at Second Presbyterian Church. Notes of condolence will be received by The Trezevant Manor Foundation on behalf of the family. In lieu of flowers, memorials may be made to The Trezevant Manor Foundation, 177 North Highland Street, Memphis TN 38111.

Jane Clay Cash is celebrating in Heaven after joining her Lord and Savior just two weeks shy of her 95th birthday. She passed away suddenly, yet peacefully, this past Sunday morning, January 2, 2022 and will be remembered fondly as the flower... View Obituary & Service Information

The family of Jane C. Cash created this Life Tributes page to make it easy to share your memories.

Jane Clay Cash is celebrating in Heaven after joining her Lord...

Send flowers to the Cash family.