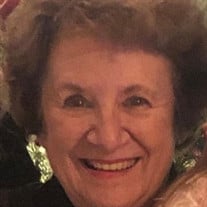 Jane Eleanor Deupree was born on February 4, 1938 to James and Irene McCune in Memphis, Tennessee. She passed away on March 15, 2021 after a short illness. Jane’s faith in the Lord Jesus Christ was steadfast and true. “Janie”, a lifelong Memphian, had many fond memories of growing up with her brother James H. “Jim” McCune. She was a 1956 graduate of Central High School where she was chosen to the Hall of Fame (Wittiest) her senior year. Following high school, Jane attended Christian College in Columbia, MO and later received her Bachelor of Science in Education from Memphis State University. Before fulfilling her long-held dream of teaching, Janie worked for Evergreen Presbyterian Church for 23 years. She wore many hats and touched countless lives – all with loyalty, devotion, and love. Janie started as a church secretary and retired as the Interim Recreation Director. Known as “Mama Deu” to countless children who grew up in mid-town Memphis, Janie was the heart of the Recreation Program for many years. She was a caring and creative after-school substitute mother for hundreds of children who needed love and attention every afternoon. After “retiring” from Evergreen, Janie was hired to teach Kindergarten at Hanley Elementary School, a position she held for 17 years. A champion of underdogs, Jane encouraged all those she encountered and fiercely stood up for anyone she sensed needed help. In the eyes of so many, she is one of the most generous, genuine, unselfish, kind, and loving persons God has ever made. Starting with her lifelong high school friends, Jane continued to add to her long list of friends through church, school, and volunteer affiliations with several organizations. An avid University of Memphis basketball sports fan, she loved to watch the Tigers. Jane was predeceased by her parents and one sibling, Jim McCune. She is survived by two children and their spouses, Trey and Cheryl Deupree and Chisholm and Terra Deupree: six grandchildren, Trevor (Sarah), Mackenzie, Whitney, Caden, Kylie, and Jesse Deupree. Arrangements have been entrusted to Canale Funeral Directors of Memphis. A Memorial Service will be held at Germantown Presbyterian Church, 2363 S. Germantown Road on Friday March 19th at 2pm with Dr. Will Jones officiating. In lieu of flowers, Memorials may be sent to Germantown Presbyterian Church or your favorite charity.

The family of Jane Eleanor Deupree created this Life Tributes page to make it easy to share your memories.

Send flowers to the Deupree family.