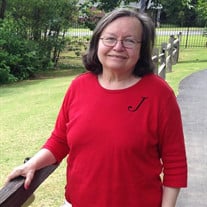 Jane Hoskins Morgret, 75, of Memphis, Tennessee, passed away on the morning of Wednesday, July 29, 2020, at Foxbridge Assisted Living. Jane battled dementia during the last decade of her life. Her family would like to thank the staff of Foxbridge... View Obituary & Service Information

The family of Jane Hoskins Morgret created this Life Tributes page to make it easy to share your memories.

Send flowers to the Morgret family.