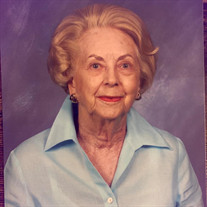 Jane Gift Peete Osborne Jane Peete Osborne passed away peacefully at her daughter’s home in Charleston, SC on Sunday, August 9, 2020 following a ten day hospital stay at Roper St. Francis after contracting Covid-19. Prior to this she had happily lived at Bishop Gadsden Episcopal Retirement Community for 14 years. Jane was born in Memphis, TN on January 10, 1922 to Russell Fitch Peete and Louise Gift Edmondson Peete. She graduated from Central High School in 1939 and went on to graduate from Rhodes College (formerly Southwestern at Memphis) in 1943 with a major in Chemistry. She was a proud member of Chi Omega sorority for over 80 years. Soon after graduation she married Captain James Libby Fling, a naval aviator in the United States Marine Corps, who was killed in the Pacific on February 14, 1945. She and Jim spent many nights dancing on the rooftop of the Peabody Hotel. After working in Atlanta, New York City, and San Francisco, she eventually returned to Memphis where she met and married a former college classmate, Wilson Irving Osborne, Jr. on December 27, 1958. Jane had many interests and hobbies, one of which was traveling. She worked at the Mid-South Travel Agency for almost 30 years helping friends plan trips all over the world. She was a lifelong member of Idlewild Presbyterian Church in Memphis, TN where she was fond of her Sewing Circle. She also volunteered with LeBonheur Club. Jane’s most treasured times were with her children and grandchildren and she enjoyed visiting them around the country. In order to be closer to her family, she eventually moved in 2006 to Charleston, SC where she made many new friends and grew to love her new home in the Lowcountry. A memorial service will be held at Idlewild Presbyterian Church at noon on Friday, August 14, 2020 in the Garth following a family burial at Elmwood Cemetery. The church requires notification if you are planning to attend so we ask that you notify one of the family if you will be there. A memorial service in Charleston, SC will be held at a future date. She is survived by two daughters, Louise Osborne Lauber (Richard) of Wheaton, IL and Roberta Osborne O’Shea (Brendan) of Charleston, SC, and four grandchildren, Edward “Ned” Osborne Lauber (Elizabeth) of Arlington, VA, Susannah Ruth Lauber of Greenville, SC, Jane Kelly O’Shea and Frances Louise O’Shea of Charleston, SC. She was predeceased by her husband, Wilson Irving Osborne, Jr. and her brother, Russell Fitch Peete, Jr. of Tucson, AZ. Her family would like to thank all the caregivers at Bishop Gadsden for their love and support over the years as well as her two special friends, Linda Andrews and Rhonda Richards, whose devotion and love are deeply appreciated. In lieu of flowers, contributions can be made to Idlewild Presbyterian Church, 1750 Union Avenue, Memphis, TN 38104 or to the Bishop Gadsden Employee Appreciation Fund, 1 Bishop Gadsden Way, Charleston, SC 29412.

The family of Jane Gift Peete Osborne created this Life Tributes page to make it easy to share your memories.

Send flowers to the Osborne family.