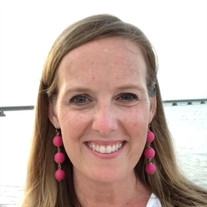 Jennifer June Thoren, of Memphis, Tennessee, departed her beautifully- lived life on the 4th of November, 2021. Jennifer was born, in Canton, Michigan, on October 28, 1977 to Nancy and Larry June. When she was nine years old, she and her family relocated to Memphis, Tennessee. It was there she met her husband, Brian Thoren. Their match was perfectly orchestrated by God. Both were quiet, introspective individuals who tended to “survey the scene” until they felt comfortable interacting. They were married for 11 years and had two beautiful children, Lucas, age 9, and Leah, age 6. It may sound cliche, but Jennifer and Brian “completed each other.” Jennifer earned a Bachelor’s of Science Degree in Business Marketing, from the University of Phoenix in 2008. She was a dedicated employee of Medtronic up until her passing. Jennifer was heaven-sent, beloved by all who knew her. Her kind, generous, loving spirit, generated a litany of friends who cherished her friendship and gentle spirit. Jennifer was a passionately proud mother, daughter, wife, sister, niece, daughter-in-law, sister-in-law, cousin, and friend, and she will be remembered for her joyful devotion, laughter and genuine warmth. Jennifer found great joy in traveling, spending time at the family cabin, cooking alongside her husband, and trying new restaurants. Jennifer loved being involved in her children’s school community, Holy Rosary Catholic School. Another of Jennifer’s passions was reading. For fifteen years, she was an active participant in a book club with some of her closest girlfriends. Even while working full-time, Jennifer always found time to feed her passions, however, her greatest passion, was spending time with her beloved family. She is survived by her husband Brian Thoren of Memphis, Tennesse; son Lucas Thoren; daughter Leah Thoren; mother, Nancy Emerick June of Memphis, Tenessee; father, Larry David June of Memphis; sister, Sara June Jayne of Memphis, Tenessee (David); in-laws, Lou and John Thoren of Freeport, Illinois; brothers-in-law, Mike Thoren of Freeport, Illinois and Tim Thoren (Ivey) of West Point, Mississippi; sister-in-law Carrie Bonebright (Bob) of Stoughton, Wisconsin; and God-Mother, Linda Emerick of Atlanta, Georgia. She is also survived by her nephew, Jackson Jayne, and nieces, Bella and Charlie Jayne of Memphis, Tennessee; nephew, Cole Luedeking of Freeport, Illinois; nephew, Clay Luedeking of Freeport, Illinois; niece, Zoe Thoren of West Point, Mississippi; and Beau Thoren of West Point, Mississippi. In lieu of flowers, the family requests donations be made to St. Jude or to the National Brain Tumor Society.

Jennifer June Thoren, of Memphis, Tennessee, departed her beautifully- lived life on the 4th of November, 2021. Jennifer was born, in Canton, Michigan, on October 28, 1977 to Nancy and Larry June. When she was nine years old, she and her family... View Obituary & Service Information

The family of Jennifer June Thoren created this Life Tributes page to make it easy to share your memories.

Send flowers to the Thoren family.