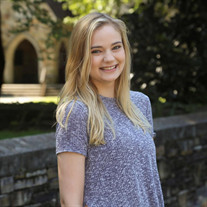 Jenny Kathryn Wilson, born June 23, 1996, departed this world on September 3, 2020. She leaves her parents, Amy and Don Wilson; brother Caleb Wilson and his wife Megan; grandmother Judy Wilson; aunt Nancy Alford and husband James; cousin Greg Wallace and wife Michelle; uncle Anthony Wilson and wife Tabethia; aunt Michelle Baker and cousins Megan Baker and Corey Hampton; as well as many other dearly loved family members. She also leaves dear friends from White Station High School, Rhodes College, and the Memphis Zoo, as well as colleagues and friends in the Memphis theatre community. At 24, Jenny had already achieved many of her dreams. She had a blast performing musical theatre at White Station High School, then moved on to McCoy Theatre productions at Rhodes College, where she studied Theatre, Music and Film. Jenny was featured in musicals at Rhodes including: Heathers; The 25th Annual Putnam County Spelling Bee, for which she received a College Division Ostrander nomination for Leading Actress in a Musical; and the title role in Violet, garnering her the 2018 college division Ostrander Award for Leading Actress in a Musical. Jenny’s performance at Theatre Memphis, again in The 25th Annual Putnam County Spelling Bee, was recognized with a 2019 Ostrander leading actress nomination. A memorable review from Jenny's college years reads, “Jenny Wilson - are you even acting? Is that just you?" Emotion, intellect, and energy were combined seamlessly in the roles Jenny inhabited. In addition to her love of theatre, Jenny was passionate about protecting and caring for 'non-human' animals, both her own pets and the animals she had the privilege of caring for at the Memphis Zoo. At the zoo, Jenny worked most closely with Ash the Gray Fox, Grizz (short for Grizzabella) the Virginia Opossum, Ross the Virginia Opossum, Aggie & Rey the Nigerian Dwarf Goats, Poppy the Binturong, Jacques & Gus Gus the rats, Milli the Giant African millipede, and Sergeant Pepper the Rhode Island Red Rooster. Because of Jenny’s work, many animals are able to thrive and serve as animal ambassadors, teaching us to better understand and protect all creatures. Because of Jenny’s abiding concern for animals and desire to make a difference in a world changing too fast for many of them, she was pursuing a Master’s degree in Anthrozoology from Canisius College, where she had recently begun her second year of study. We have lost our beautiful daughter, sister, friend and colleague. The world is a darker place without the light of her talent, humor and kindness. Jenny touched so many lives, whether performing onstage or just quietly lending her presence, sometimes without saying anything at all, but now and then catching you complete off-guard with her spot-on ‘Where did that come from?!’ observations and insights. A gentle and thoughtful soul who cared for all creatures, even the most humble mouse or insect, Jenny taught others to love more deeply by her example. There is no better way any of us could hope to have lived. A memorial service will be held at 6:00pm on Monday, September 14, at the Memphis Zoo. Please note, all attendees must be masked and social distancing guidelines will be strictly observed. If you plan to attend, email the number of attendees in your group to [email protected], ensuring that as many family and friends can be safely accommodated as possible. Thank you.

The family of Jenny Kathryn Wilson created this Life Tributes page to make it easy to share your memories.

Send flowers to the Wilson family.