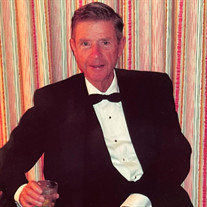 Jerry F. Gay passed away at the age of 97 Sunday, September 19, 2021. In his own words, he led a charmed life. He is survived by his wife, Emily Roberts Gay, his two daughters, Neville Williams (Warfield) and Sarah Guyton (Tim), as well as granddaughters, Vivian and Patterson Guyton. He also leaves his “adopted” son, James Lamar. Born in El Dorado, Arkansas on November 23, 1923 to Hubert and Halyeburt Gay, the family moved to Memphis when he was a toddler. He attended too many kindergartens to be listed, but remembered Miss Cook’s as his favorite. He graduated from Pentecost-Garrison School, Baylor School in Chattanooga, and attended the University of Texas at Austin until he was drafted into the U.S. Army to serve in World War II. Spending four years in New Guinea and the Philippines, he was Civil Affairs and Civilian Personnel Director and was awarded the Bronze Star for support of combat operations. After returning from World War II, he became managing partner of Gay Hills Ranch in Horn Lake, Mississippi, breeding registered Polled Hereford cattle. His bronzed Stetson is enshrined into the Polled Hereford Hall of Fame for exporting the first bull back to Great Britain. After raising cattle, Jerry had a thriving livestock insurance business as an agent and director of American Livestock insurance Company for over sixty-one years. He was active as an agent until the time of his death. The family thanks his loyal executive assistant, Wilhelmina Patterson. In his spare time, he was president of Gay Oil Company, co-organizer and director of DeSoto County Planning Commission, co-organizer and First Vice President of DeSoto National Bank, developer of the first shopping center in Southaven and for two years served as chairman of the Desoto County grand jury. One of his great loves included flying his Beechcraft Bonanza for over fifty years, landing in all forty-eight contiguous states, Canada, and Mexico. He was president of the Sportsman Pilot Association, a private aviation organization. He was an avid golfer, playing many courses in the U.S., Great Britain, continental Europe, Africa, and the Philippines. He was a member of the University Club and Chickasaw County Club and a communicant of St. John’s Episcopal Church. The family would like to thank Elmira Beason, Tiajuana Robinson, Myra Tabron, and Ann Thomas for their care and support. A memorial service will be held Monday, September 27 at 11:00 a.m. at St. John’s Episcopal Church. Masks are required. Memorials can be sent to St. Jude Children’s Hospital, St. John’s Episcopal Church or Baylor School.

Jerry F. Gay passed away at the age of 97 Sunday, September 19, 2021. In his own words, he led a charmed life. He is survived by his wife, Emily Roberts Gay, his two daughters, Neville Williams (Warfield) and Sarah Guyton (Tim), as well as... View Obituary & Service Information

The family of Jerry Falvey Gay created this Life Tributes page to make it easy to share your memories.

Send flowers to the Gay family.