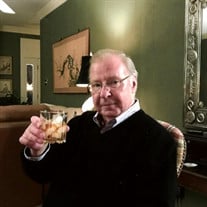 Jimmie Ray Perkins November 18, 1943-November 26, 2020 One of eleven siblings, Jim was born in Independence, MS to Virgie and Herbert P. Perkins. After graduating from Oakhaven High School in Memphis, Jim joined the Army in June of 1961. He received training at Ft. Leonard Wood, MO and Ft. Devins, MA. Included in his training was Intelligence and Advanced Traffic Analysis (External Enemy Communications). Jim was stationed in Chitose off the Island of Hokkaido, Japan from June 1962 until May 1964. In May 1966, Jim was sent to Vint Hill Farms Station, VA, an Army Security Base. In October 1966, after orders to go to Vietnam were cancelled, Jim was sent to National Security Agency Headquarters at Ft. Meade, MD. After receiving special training there, he was sent to South Korea where he led a classified compartment project. During his service Jim was awarded The National Defense Medal, Good Conduct Medal, The Korean Expeditionary Medal, and A Commendation Medal. His Army service ended in 1968 at which time he began his financial career at Household Finance. Later he was in Commercial Lending at Memphis Bank & Trust. Jim saw Mom in the breakroom in May 1975 and thought, I am going to marry that woman! The rest is history! Jim finished his career at Renasant Bank in 2019. Jim will always be remembered as a kind gentleman who loved his family first and foremost. He loved his country and felt it a privilege to serve. Jim most recently enjoyed spending time by the pool and in his easy chair watching his beloved Volunteers and the Hallmark channel. Jim leaves behind Ann, his adoring wife of 40 years, and his sons McGuire and Martin (Mindy). In lieu of flowers, a gift in honor of Jim’s life may be made to a charity of your choice. Due to the COVID-19 restrictions, the family will have a private service.

Jimmie Ray Perkins November 18, 1943-November 26, 2020 One of eleven siblings, Jim was born in Independence, MS to Virgie and Herbert P. Perkins. After graduating from Oakhaven High School in Memphis, Jim joined the Army in June of 1961. He... View Obituary & Service Information

The family of Jimmie Ray Perkins created this Life Tributes page to make it easy to share your memories.

Send flowers to the Perkins family.