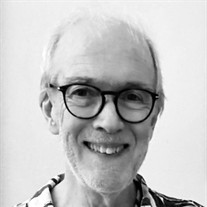 John Haldane Gemmill died February 24, 2022, at his home in Memphis, Tennessee due to complications of cancer. Born September 23, 1949 in Exeter, New Hampshire to Eva Herbert and Hughes Gemmill, John was raised with his sister Elizabeth in rural Poestenkill, New York. Early on, he developed a passion and talent for music and a keen interest in visual arts, which he carried with him throughout his life. John studied film and photography at Antioch College in Yellow Springs, Ohio. While completing his studies he was a member of the Ohio Newsreel cooperative, and he became involved in political activism as a graphic artist and organizer. At Antioch he met Jill Padawer, whom he married in 1973. Together, they moved to Birmingham, Alabama, in 1976 to be a part of the Southern labor movement. In Birmingham, John worked as a machinist, steelworker, and an occasional mobile grocer. He also worked for several years in the printing business, first as the co-proprietor of a printing firm, and later as salesman at Craftsman Printing. John’s commitment to social progress led him to begin a career as a public servant. He received a master’s degree in Public and Private Management from Birmingham Southern College, completed his Ph.D. in Public Policy at Auburn University. He began his public service career in the City of Birmingham Office of Economic Development. He later worked in the administration of Mayor Richard Arrington, where he oversaw revitalization and environmental remediation projects. He continued at the U.S. Department of Housing and Urban Development, and became the Field Office Director for West Tennessee, relocating to Memphis in 2008. As a community builder, he brought people together around the issues of improving subsidized and substandard housing. Everywhere he went John quickly forged close relationships with an ever-growing group of friends. His optimism and love for life were apparent to all who had the good fortune to know him. He held annual spring and winter solstice parties, continuing a family tradition. He was a connoisseur of Italian coffee and Kentucky bourbon. His passion for music led him to be an active member and president of the Memphis Blues Society and founder of the Bona Fide Music Festival. His love of art and conversation led him to join or initiate multiple book and film clubs. He was an avid cyclist in the Memphis Hightailers and Birmingham Bicycle Clubs and an active outdoorsman, scaling many of the highest peaks in the contiguous United States. Throughout his life, John brought people together in the spirit of camaraderie and service. Much of his personal time was committed to activities he felt served the greater community. He was an active member of the First Unitarian Church of Memphis (Church of the River), the Midtown Rotary Club, United Housing Inc., Birmingham’s YMBC Civic Forum, October League (CP-ML), the Entmoot Book Club, Bijou Dream Cinema, Memphis Blues Society, Birmingham Historical Society, Alabama Association for Arts Education, Kennedy Center Imagination Celebration, Memphis Hightailers Bicycle Club, Birmingham Bicycle Club, and Boy Scout Troop 111. John is survived by his sister, Elizabeth, of Las Vegas, Nevada; his son, Aaron and wife Kressent Pottenger, of Philadelphia, Pennsylvania; his daughter Janet, of Washington, District of Columbia; and his grandchildren Eva Maxine, Malcolm Wolf, Frances Wolf Peckham, and August Miles Peckham. He also leaves his love and companion Peggy Turley. During his illness, he welcomed with great delight each visit, phone call, and Zoom meeting from dear family and friends who, equally, delighted in his wit, humor, and forthrightness. A memorial service will be held 1:00 p.m., Saturday, April 9 at the Church of the River at 292 W. Virginia Ave., Memphis, Tennessee 38103. If desired a gift may be made to the church or to the Poestenkill Library, PO Box 305, Poestenkill, New York 12140.

John Haldane Gemmill died February 24, 2022, at his home in Memphis, Tennessee due to complications of cancer. Born September 23, 1949 in Exeter, New Hampshire to Eva Herbert and Hughes Gemmill, John was raised with his sister Elizabeth in... View Obituary & Service Information

The family of John Haldane Gemmill created this Life Tributes page to make it easy to share your memories.

Send flowers to the Gemmill family.