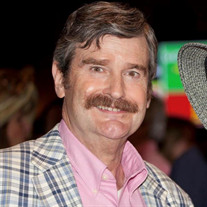 Jack Marshall was loved. And he loved -- Elvis, Churchill, Stax musicians, barbecue, seersucker suits, bow ties and madras, Memphis, fast sports cars, Tiger football and basketball, his wife Jessie and, most of all, the Lord. John Fentress Marshall, better known as Jack, passed away Friday, June 5, 2020. Born October 27, 1949, Jack was a graduate of Central High School and the University of Memphis, where he studied business. He had a long career as a commodities broker and money manager. Upon graduation from college in 1973, Jack joined Dean Witter and Company as a commodity broker. In 1977, he and his wife Jessie relocated to Chicago, where Jack worked as a floor trader in the grain markets. Stunned by the ferocity of Chicago’s winters, they returned to Memphis in 1978, where Jack continued his work as a broker at various firms, eventually starting his own business. He had a special affinity for two very different commodity markets, soybeans and silver. These two were the source of much joy -- and sometimes angst – over the years. Recently, Jack was in charge of farmer hedging accounts for Brock Associates of Milwaukee, Wisconsin. Well-known in the community, Jack was a longtime member of Second Presbyterian Church, where he belonged to the Faithworks Sunday School class. He was a strong believer and helped several friends come to know the Lord. Jack counted scores of people as close friends. Between his longtime association with his church, his business, the University Club, and his duck-hunting, poker-playing, cigar-smoking and storytelling buddies, Jack seemed to know everybody, and everybody seemed to know him. On Friday, news of his death spread like wildfire. Literally dozens of friends reached out within hours, and the calls and messages continue to pour in. The family appreciates the support. Jack served on the board of directors of the Memphis Cotton Exchange and the University Club. He was a deacon of Second Presbyterian Church. For years, he was an active adult leader and Committee Chairman of Boy Scout Troop 34 at Grace-St Luke’s, where his son John became an Eagle Scout, and where Jack was responsible for creating a groundbreaking, innovative fundraising system. Jack was fanatical about physical fitness, for many years an early morning fixture in the gym, followed by his daily routine of climbing eight flights of stairs to reach his office (if he wasn’t out riding his bicycle). Others in his family were exhausted by his lifestyle, only occasionally relieved by his passion for mixing bourbon-based cocktails which were greatly enjoyed at family gatherings. Jack is survived by the love of his life, his high school sweetheart and wife of 45 years, Jessie Gallagher Marshall. They have three children, Avril Marshall Foote (Guy), of Dallas, Texas, Jordan Marshall Wonsmos (Jeff), of Plano, Texas, and John Gallagher Marshall (Cynthia) of Sewanee, Tennessee, and two grandchildren, William and Lila Wonsmos of Plano. Jack is also survived by two sisters, Dr. Susan Pearson (Tom Watkins) of Lander, Wyoming, Christie Marshall Grothe (Randy) of Dallas and a brother, Jerry Marshall (Elizabeth) of Memphis, along with eight adoring and adored nieces and nephews, and six great-nephews and nieces, and beloved godson Walker Uhlhorn. He was preceded in death by his parents, John and Helen Marshall. A private family service will take place soon, followed by a larger memorial event at an appropriate later date. In lieu of flowers, memorials may be sent to the Association for the Bladder Exstrophy Community, https://www.bladderexstrophy.com/give-now/, Second Presbyterian Church, or Memphis Union Mission.

The family of John "Jack" Fentress Marshall created this Life Tributes page to make it easy to share your memories.

Jack Marshall was loved. And he loved -- Elvis, Churchill, Stax...

Send flowers to the Marshall family.