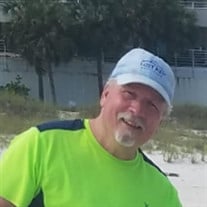 John Clement Marshall, Jr., devoted husband, father, brother, and friend, passed away on Saturday, December 19, 2020 following a hard-fought battle with COVID-19. He was 69 years old and otherwise in excellent health. A lifelong Memphian (except for a brief stint in Chicago), John was the eldest of four children born to John Clement Marshall, Sr. and Elizabeth (Bet) Marshall. John attended Grahamwood Elementary, Presbyterian Day School, White Station Junior and High Schools, Ole Miss, and Memphis State University, where he served as president of the Memphis State chapter of Phi Kappa Psi. He later earned an MBA from Lake Forest Graduate School. Scouting was a big part of John’s life. He was a member Troop 219, Church of the Holy Communion, Chickasaw Council of B.S.A. , and he attended Philmont Scout Ranch in Cimarron, New Mexico. He distinguished himself by earning the Order of the Arrow, the Centennial Shiloh Trail Award, and his God and Country Award. Furthermore, he attained the rank of Life Scout, the second highest scout ranking. Scouting instilled the ideal of providing cheerful service to others which he carried with him throughout his life. John had a knack for appearing at just the right time to catch family, friends, and colleagues from falling off cliffs both real and metaphorical. He was happiest when helping other people, whether they were family members or complete strangers. A longtime member of Calvary Episcopal Church, John trained and served as a Lay Eucharistic Minister for 16 years. John’s career included medical technology sales and support, and information technology. At the time of his death John worked as an IT analyst for Youth Villages where he was proud to support the mission of helping children. He met the love of his life, Connie, when she struggled to get a bicycle into a rickety Shrine Building elevator one morning. They married in 1985 and divorced amicably seven years later. They remarried in 1999, thanks to a stroke of luck that reunited them at a Notre Dame football game. After that they were inseparable until John’s death. John’s greatest joy was his family. Born January 20, 1951, John was preceded in death by his parents and by his younger sister, Mary. In addition to Connie, John III (Jacey), and Bruce, John leaves behind his brothers Lee (Cindi) and Robert (Donna), both of Memphis, niece Mary Maxwell (Stuart), nephew Lee, Jr.; his dogs Jordy and Filby; cats Jinksie and Pouncy; and too many cherished friends and neighbors to count, in particular those from the Shrine Building and Vinton Avenue. The family would like to thank the exceptional team of healthcare workers on the 6th floor Shorb ICU COVID Unit at Methodist University Hospital for their heroic struggle to keep John in this world. A celebration of life will be held as soon as Memphis is free from the virus that took John’s life. In the meantime, memorial gifts may be sent to Calvary Episcopal Church, Youth Villages, or any a charity of the donor’s choice.

The family of John Clement Marshall Jr. created this Life Tributes page to make it easy to share your memories.

Send flowers to the Marshall family.