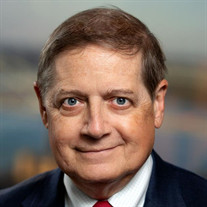 John Louis Ryder, born May 31, 1949 in Chicago, Illinois, died at home with his family in Memphis early Sunday morning May 15, 2022. By the time John was 14, the interests that would shape his life had begun to blossom. In childhood, he became an avid baseball player, and the TV legal drama Perry Mason sparked a desire to become a lawyer. His family’s move to Memphis in 1963 gave him a love of the South, Tennessee, and the Mississippi River, and Barry Goldwater’s 1964 Presidential campaign inspired his interest in politics. John would study the rules of baseball, law, and politics, but he also appreciated the strategies of play. After graduating from White Station High School and Wabash College (his father’s alma mater) John attended Vanderbilt Law School and then returned to Memphis to begin his law practice in 1974. As a baby lawyer with Canada, Russell, and Turner, he learned the ins and outs of trial and collection work from “Mr. Charlie” Somerville who introduced him to the ways of the courthouse. In the early days of his practice, he did part time work in the Shelby County attorney’s office and helped to draft the Home Rule Charter for Shelby County. He would continue honing his knowledge of Shelby County law and at the same time develop expertise in bankruptcy law and commercial litigation and later in election law. Once back in Memphis, John began to explore ways to become involved in politics and local elections, and his political career was an illustration of what someone with a passion for politics can accomplish. He was introduced to the Young Republicans in 1975 and became active in one of the two local clubs where at sometimes tense meetings, he learned how tricky and fiercely competitive the political world could be. He dove into the nitty gritty of political campaigning: knocking on doors, registering voters, putting out campaign letters, making speeches. He loved nothing more than large political events where he could enthusiastically meet and engage with others who shared his political passions. He managed campaigns for state legislators Brad Martin and Karen Williams, and worked in campaigns for Tennessee Republican luminaries Winfield Dunn, Lamar Alexander, Don Sundquist, and Fred Thompson. He was instrumental in the election of Jim Rout as Shelby County Mayor in 1994. John also began to assume leadership roles in the party, beginning with election as Chairman of the Shelby County Republican Party in 1987 and going on to become an active member of the state party’s Executive Committee and later one Tennessee’s representatives on the Republican National Committee. He was General Counsel for the RNC from 2013 to 2017 under Reince Priebus. He was also delegate or active participant at every Republican National Convention between 1984 and 2016. In both 1988 and 2004, he cast votes for President and Vice President as a Tennessee Presidential Elector in the Electoral College. From humble local political gatherings in a living room or back yard, John went on to meetings large and small at the highest levels of Republican Party politics. Outside of the courtroom and political back rooms, John indulged in other passions. He was active in his church. His nightstand was piled high with books about history, politics, cooking, or whatever his current interest was. He was a season ticket holder to the Memphis Redbirds, an appreciative judge in the Memphis in May Barbecue Contest for several years, an avid duck hunter, and a regular member of John Grisanti’s wine group. His love of opera began in high school when he served as a walk-on soldier in the Metropolitan Opera’s local production of Turandot, and he was an active supporter and board member of Opera Memphis. John leaves behind his high school sweetheart and wife of almost 49 years Melita Lain Whitaker, their daughters Reagan Lain Ryder and Nancy Kate Ryder, son-in-law Xavier Pedeux, grandson Fletcher Ryder Pedeux, and sisters Peggy Ryder Askew (Henry), Pat Ryder Lovell (Scott) Visitation will be Sunday, May 22 from 3:00 to 5:00 at Canale Funeral Directors. The funeral will be held at St. John’s Episcopal Church, 3245 Central Avenue, on Monday, May 23 at 1:00 followed by a brief reception in the parish hall. Memorials may be sent to St. John’s Episcopal Church, Opera Memphis, or Wabash College (301 W. Wabash Avenue, Crawfordsville, IN 47933)

John Louis Ryder, born May 31, 1949 in Chicago, Illinois, died at home with his family in Memphis early Sunday morning May 15, 2022. By the time John was 14, the interests that would shape his life had begun to blossom. In childhood, he became... View Obituary & Service Information

The family of John Louis Ryder created this Life Tributes page to make it easy to share your memories.

Send flowers to the Ryder family.