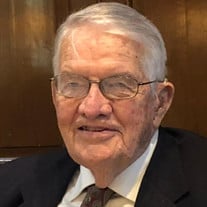 John Dunlap Sheaffer – May 10, 1925 – February 6, 2021 John Sheaffer was the second of four children born in Chicago, Illinois on May 10, 1925 to Craig Royer and Virginia Dunlap Sheaffer of Fort Madison, IA where he made his home until moving to Memphis, TN in 2017. After graduating from high school at Culver Military Academy in 1943, he volunteered to serve in the Army. He was assigned to the 25th Infantry Division in the Southwest Pacific theatre of operations. He participated in the Philippine liberation on the Island of Luzon and the Allied transition of the Island of Honshu from Japanese control. He was awarded the Bronze Star for Valor and received an honorable discharge from Military Service in January 1946. He entered the University of Colorado in September of 1946, graduating in 1950 with a Bachelor of Science degree in Business Administration. He returned to Fort Madison where he went to work for the W.A. Sheaffer Pen Company, his family-owned business. After serving the company in several capacities, he became Vice President of International Operations, overseeing manufacturing and sales functions in Canada, Australia, Brazil, England, and Argentina. At the time Sheaffer had exclusive dealers in 77 countries. He also served on the Sheaffer Board of Directors until the company’s sale. On February 3, 1951 he married Gertrude Russell Coors in Memphis, TN with whom he recently celebrated his 70th Wedding Anniversary. Together, they raised four children in Fort Madison who survive. John Dunlap Sheaffer Jr (Kathy), Virginia Sheaffer Kemp (Harry), Carolyn Sheaffer Masterson (Daniel) and Russell Walter Sheaffer (Vicki). He also leaves behind nine grandchildren and one great grandchild. He was preceded in death by his parents, brother Walter A. Sheaffer II (Anne) and sisters Harriet Sheaffer Taylor and Susan Sheaffer Taylor (Charlie). He was an active member of St. Luke’s Episcopal Church, serving on the Vestry for many years. He was a Rotarian and was Chairman of the Board of Trustees of the Sheaffer Memorial Golf Course and served as President of the W. A. Sheaffer Memorial Foundation. He served one term as the President of the Iowa Good Roads Association and on a number of other community and civic boards in Iowa. He loved hunting, fishing, boating, and golfing, and especially enjoyed spending time at his home on the beach in Florida with family and friends when not in Fort Madison. He was a member of the Fort Madison Country Club, Burlington Golf Club, Keokuk Country Club, The Union League Club of Chicago, and the Memphis Hunt & Polo Club. A In lieu of flowers, the family requests any memorial donations be made to the Coffeen Land Trust, 146 Coffeen Hill Road, Four Mile Village, Santa Rosa Beach, Florida 32459.

The family of John Dunlap Sheaffer created this Life Tributes page to make it easy to share your memories.

Send flowers to the Sheaffer family.