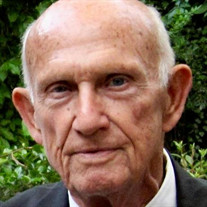 John Dabney Walt, 95, died at home March 27, 2022 with his wife Jo by his side. John was born September 11, 1926 in Memphis, Tennessee to Lucy Dabney and Charles Airey Walt. Drafted in his senior year of high school at Christian Brothers, John was an Army Ranger. After graduating from Vanderbilt Law School, John practiced law in Memphis at the firm that became Walt, Dyer and James. He was the first chairman of the Legal Services Committee of the Shelby County Bar Association and chairman of the Law Library Committee for sixteen years - a work he took pride in, following in the footsteps of his father-in-law, Justice Andrew O. Holmes. John was on various boards, including The Pink Palace where he served as chairman during their expansion and was honored as trustee emeritus. In 1951 John married Josephine Holmes and for 70 years their lives and Christian ministries were intertwined in Memphis and around the world . They have five children: Mary and the late Lance Minor, III, Lucy and John Wepfer, John and Laura Walt, Josephine and Mike Chrestman, and Andrew and Lacey Walt, along with 26 grandchildren and fifteen great-grandchildren. John particularly cherished Sunday Lunch gatherings with his ever-expanding family. John believed wholeheartedly that “to live is Christ and to die is gain” (Philippians 1:21), and spent his life living Christ wherever he was. He and Jo went to China for a year, four different times, to teach and share Jesus with the students. Later they spent two years in Northern Iraq, working at The Classical School of the Medes. After connecting with Young Life Ministries on a family trip to Colorado, they had the vision for The Country Place, a Christian retreat center in Moscow, Tennessee. A few young men stopping by regularly around suppertime grew into Monday Night Dinners - a weekly open invitation for years to anyone who wanted food and fellowship. In 1993 they founded The Neighborhood School - a Christian school designed to reach disadvantaged children falling through the cracks in the local school. An enthusiastic gardener, John spent his time at The Country Place landscaping and cutting grass even at the age of 94. He loved poetry and taught his children poems as he drove them to school; the night before he died, he was reciting lines of those poems with them. John’s life will be celebrated Thursday with burial at Forest Hill Cemetery followed by a memorial service at 12:30 at First Evangelical Church. Instead of flowers, they request memorials to Country Place Ministries, 1850 Price Rd, Moscow, TN 38057.

John Dabney Walt, 95, died at home March 27, 2022 with his wife Jo by his side. John was born September 11, 1926 in Memphis, Tennessee to Lucy Dabney and Charles Airey Walt. Drafted in his senior year of high school at Christian Brothers, John... View Obituary & Service Information

The family of John Dabney Walt created this Life Tributes page to make it easy to share your memories.

Send flowers to the Walt family.