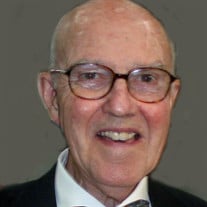 Joseph T. Barnett August 10, 1927 – September 17, 2021 Joseph Townsend Barnett, 94, son of John Edward and Margaret Stryker Barnett, was born in Norton, VA on August 10, 1927, and died in Memphis, TN on September 17, 2021. Joe attended Sacred Heart and St. Thomas Catholic elementary schools, Catholic High School (Class of 1945), and Memphis State University. He graduated with an architectural degree from Clemson University. He was a veteran of World War II and the Korean Conflict serving in the Army Corps of Engineers. During his 62-year architectural career in Memphis, he worked for Wiseman Bland; Martin Barnett Associates; Allen & Hoshall; Joseph T. Barnett, Architect; and the University of Memphis. He designed numerous churches and schools including many for the Catholic Diocese of Memphis and the Jubilee Schools and was a recipient of the Bishop Carroll T. Dozier Service Award. A member of Holy Rosary Catholic Church since 1955, he served as a Lector and Extraordinary Minister of Holy Communion. He was active in many organizations including the American Institute of Architects, Cursillo Movement (a founding member of Memphis Cursillo), Birthright of Memphis, Serra Club, Catholic Diocese of Memphis Building and Properties Commission, Catholic Campus Ministry, Immaculate Conception High School Advisory Board, Toastmasters, and Tenn-Ark-Miss Girl Scouts. He leaves his wife of 66 years, Betty Haaga Barnett, the love of his life and the prettiest little girl in the first grade at Sacred Heart. He also leaves his three daughters, Claire Barnett, Margaret Anne (Steve) Murphy, and Caroline Barnett; four grandchildren, Megan (Justin) Carter, Joseph (Alicia) Murphy, Andrew (Patricia) Murphy, Kevin (Ally) Murphy; and three great-grandchildren, David, Charlie, and Elizabeth Carter and a fourth great-grandchild due in April 2022. He was pre-deceased by his brothers, Jack and Jim Barnett. His family thanks the Noah’s Ark caregivers for their excellent care. Those who knew Joe will remember his knowledge of Memphis history and his love of storytelling. He leaves as a legacy his devotion to his faith and family and his example of service. The visitation and rosary will be on Wednesday, September 22 from 5:30 to 7 p.m. and the Mass of Celebration will be on Thursday, September 23 at 10:30 a.m., both at Holy Rosary Church, 4851 Park Ave. Due to COVID concerns, as recommended by the Shelby County Health Dept, masks are strongly encouraged. In lieu of flowers, the family requests donations to Holy Rosary Church or Birthright.

The family of Joseph Townsend Barnett created this Life Tributes page to make it easy to share your memories.

Send flowers to the Barnett family.