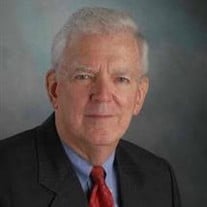 Joseph (Joe) N. Saino passed away on February 28, 2020, at the age of 86. Joe was born on June 1, 1933, to Felix H. and Cecilia N. Saino of Memphis, joining older brothers Felix and John in what they would later refer to as the “band of brothers.” Joe attended Christian Brothers High School, graduating in 1951. After first attending Carnegie Mellon University, Joe transferred to Vanderbilt University and graduated in 1956 with a degree in electrical engineering. Upon graduation, Joe returned to Memphis and joined his brother Felix at F.L. Saino Manufacturing Company, a fire door manufacturing business founded by their grandfather in 1899. Joe and Felix, a mechanical engineer, formed a dynamic team, cementing Saino Manufacturing’s place as an industry leader in the design and manufacturing of steel fire doors. A talented engineer and inventor, Joe designed a number of industry firsts and expanded the business internationally. He was chosen as president of the National Association of Architectural Metal Manufacturers and served for decades on the National Fire Protection Association Committee to set the standard for fire doors and fire windows in national building codes. Joe was President of Saino Manufacturing until 1993, when he retired from full-time work and began a consulting career. Joe was not made for retired life. His active mind sought constant stimulation, and he soon turned his attention to improving his hometown. Joe served on the board of Moore Tech and was chairman of the board at Memphis Light, Gas and Water. He championed the causes of transparency and fiscal responsibility in city and county government. Believing citizens deserve to understand how their tax dollars are being spent, he sought government records and did not hesitate to take legal action when his open records requests were denied. Publishing his findings on his blog, he became known as a government watchdog and was often interviewed by reporters seeking his expertise on budget issues. Driven by his desire to serve his city, he eventually ran for City Council in 2007 at an age when most would be content to sit on the sidelines. He continued his investigations and maintained his blog until shortly before his death. As dedicated as Joe was to his work and other pursuits, his true love was his family. He met Claire Sebralla at a dance in the late 1950s and knew from that moment that she was the love of his life. They married in 1963, and he soon became the proud father of four daughters. Joe was also devoted to his extended family, particularly the Neuhoff clan on his mother’s side. He loved attending the annual family reunions, sometimes winning the competitive family gin rummy tournaments, and he was sure to look up and visit with relatives whenever he traveled. Joe had a booming voice and a big personality. Intensely curious and fiercely intelligent, he was well informed on almost every topic and often amazed his grandsons with his extensive knowledge of history and science. With his quick wit and infectious laugh, he was the life of any gathering. He loved his friends, savoring his annual summer vacations with them on Perdido Key, and, later in life, his almost daily bridge games with a variety of friends and acquaintances. He lived his life to the fullest, right to the end. Joe leaves his loving wife of 57 years, Claire Sebralla Saino; four devoted daughters, Cathy Morton, Celia Saino, Carolyn Saino, and Elaine Gumbert; three sons-in-law, Ted Morton, Dan Ratner, and Gregg Gumbert; three adoring grandsons, Graham and Luke Gumbert and Avi Saino-Ratner; and his brothers, Felix and John. He also leaves behind a number of lifelong friends and many nieces, nephews, cousins and other extended family members. Visitation will be held Monday, March 9, from 5:00 to 7:00 p.m. at Canale Funeral Directors, 2700 Union Extended. Services will be at Church of the Holy Spirit, 2300 Hickory Crest, on Tuesday, March 10, at 10:30 a.m. In lieu of flowers, the family requests any memorials in honor of Joe be made to Moore Tech, Church of the Holy Spirit, or Trezevant Manor.

The family of Joseph "Joe" N. Saino created this Life Tributes page to make it easy to share your memories.

Send flowers to the Saino family.