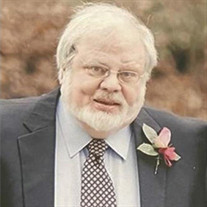 Joseph Allan Klodzinski of Piperton, TN, began his new journey on Monday, October 18, 2021, at the age of 74. Allan was born on April 20, 1947 to Joseph H. and Glenys J. Klodzinski in Little Rock, AR. He graduated from White Station High School in 1965 and then attended Christian Brothers University and earned a degree in electrical engineering in 1970 while working as a jeweler. He however found electrical engineering not to be as intriguing as he once thought and continued his career as a jeweler. Allan was very well known in the Memphis area as one of the best jewelers due to his outstanding craftsmanship. He mentored many along the way and made many life-long friends on his journey. Allan often reminded us “Don’t look at something for what it is but for what it could be”. He was one of the most creative, inventive, and handiest men ever to walk the earth. He had a passion for woodworking. One of his most notable projects was the altar that he designed and built for the Church of the Holy Apostles. The base of each leg of the altar was made of lumber from the nave of the original Church of the Holy Apostles. If he dreamed it, he could build it, and if you broke it, no matter what it was, he could fix it. After all, according to him… you can only open and close the door so many times before some part of the door breaks, and somebody will have to fix it. Allan married the love of his life, Bonnie Stanley, on May 27, 1968. They shared 53 wonderful years of marriage. Allan is survived by his wife Bonnie Klodzinski, daughter Kristi Mulrooney (Eric Divelbiss), son Michael Klodzinski (Anna), granddaughters Samantha and Emma Mulrooney, and furbabies Peanut and FeFe. In lieu of flowers, memorial contributions may be sent to Church of the Holy Apostles, 1380 Wolf River Blvd. Collierville, TN 38017 or Small Paws Rescue, Inc., 3316 South 72nd West Ave, Tulsa OK 74107. Visitation will be held at the Church of the Holy Apostles, 1380 Wolf River Blvd. Collierville, TN 38017 on Saturday, October 30, 2021 at 10:00 am with a Celebration of Life following at 11:00 am.

The family of Joseph Allan Klodzinski created this Life Tributes page to make it easy to share your memories.

Send flowers to the Klodzinski family.