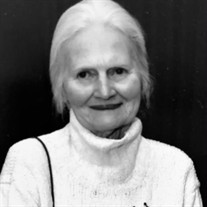 Joyce Slocum Meacham Gingold – born in New York City February 23, 1926 – artist, sculptor, educator and journalist, died on Thursday, October 15, 2020 in Memphis, Tennessee at the age of 94. Joyce had a most unusual upbringing, self-educated by books and never attending primary or secondary school. Through extraordinary self-will and a demonstrated intellect, she was accepted to and formally educated by the University of Georgia and later The Memphis College of Art (Memphis Art Academy). She taught art for over 40 years at St. Georges and St. Mary’s Episcopal School where she was a mentor to countless students by creating an accepting and loving space for artistic passions to grow. Her students were her extended family. Joyce’s first public exhibition of her creative sculpture was at the David Lusk Gallery in 2005. Her work was shown in a major exhibition at the Dixon Gallery and Gardens in 2014. Her first career in journalism was as an editor at Bobbs Merrill Publishing and later at The Charlotte Observer, The Charlotte News and The Gastonia Gazette and The Memphis Press-Scimitar. It was in Charlotte where Lester saw Joyce walking in the rain carrying a stack of books and offered her a ride which led to a 68 year marriage. Her love for writing and reading (and Lester) continued as she was the unofficial editor and publisher alongside him as he developed The Active Times and The Best Times newspaper. An artistic soul, an original hippie feminist – authentic eccentric – she broke norms she didn’t know existed. In the Fifties she could be seen riding her bike in East Memphis, in a dress – European style. Her chic yet simple fashion of long dresses and skirts gave her an iconic style that added to her unique presence. As an art teacher she would pile her students in the back of the school bus and make impromptu field trips to art museums and health food stores. She would often start class or any conversation with, “What did you dream last night?” Joyce and Lester lived up to their once personalized license plate “actives” as they made themselves frequent fixtures at art shows, health food stores, book stores, libraries, their beloved restaurant Paulette’s, great grandchildren's sporting events, symphony, church, and numerous other civic activities She was never far from her late husband Lester and usually with sculpting clay in hand. She enjoyed vacationing on Cumberland Island, spinach smoothies, and her cats, but most of all, her family. She hated flying and disapproved of soft drinks. Never one to take pain meds or willingly see a doctor – she was a fighter to the end. She was preceded in death by her children, Marion Fortas, Paul Meacham Gingold, and David Slocum Gingold and her husband of 68 years, Lester Frederic Gingold. Joyce is survived by her daughter, Joy Bateman (Bill Anderson) and grandchildren: Miles Slocum Fortas (Ellen), Mason Gingold, David Gingold Jr., Anna Wunderlich (Ben), Brown Burch (Betsy), and William Bateman; great grandchildren: Jack Fortas, Will Fortas, Ben Wunderlich Jr., Alex Wunderlich, Bays Wunderlich, and Lucille Burch. Other survivors include nephew Andrew Carnegie IV, niece Bebe Carnegie, and Brenda Narvin. Remembrances to Church of The Holy Communion

The family of Joyce Meacham Gingold created this Life Tributes page to make it easy to share your memories.

Send flowers to the Gingold family.