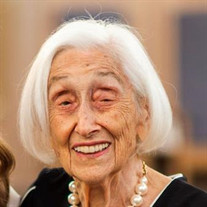 Dr. Judith H. Lax, formerly of Summit, NJ, passed away on April 19, 2022, at her residence in Germantown, TN, surrounded by her family, three weeks shy of her 98th birthday. She was born on May 7, 1924, to Sophie and Isaac Heckelman. Judith grew up in Borough Park, Brooklyn. After receiving a B.A. from Brooklyn College, she pursued a Master’s Degree in Spanish at the University of Wisconsin and completed her doctoral work in Spanish at Syracuse University where she met her late husband, Dr. Melvin Lax, who was a physics professor. They married on June 26, 1949, and were married for 53 years. She was an adjunct professor at Spanish at Middlesex College. Judith was an active lay leader in the Jewish community. In 1971, she became the first woman president of any Conservative synagogue, serving at Congregation Ohr Shalom. She was the first woman president of the New Jersey Region of the United Synagogue of Conservative Judaism (USCJ) from 1975-1979 and was the first woman national officer of the USCJ. In 1979, Judith was honored with the first Aliyah (being called to the Torah) given to a woman at a national USCJ convention. At the time, this was quite controversial. Her actions helped pave the way for the full participation of women in Conservative Judaism as lay leaders, cantors and rabbis. From 1980-1983 she served as the President of the Board of Governors of the Solomon Schechter Day School (SSDS) of Essex and Union (now Golda Och Academy) and also served on the Board of the national SSDS Association. She was a devoted wife, mother, and grandmother. She instilled in her family the importance of family, Jewish values, educational achievement and community service. Judith was fiercely independent and possessed an inexorable will that enabled her to overcome many obstacles. She loved dogs, cooking, camping trips, strong black coffee, reading the New York Times, grilled cheese, iHop, classical music, and rooting for the Yankees. Judith was predeceased by her siblings, Saul and Joseph Heckelman. She is survived by her children, Ruth Laurie Lax (Eric Kober) of Kew Gardens, Queens NY, David Lax (Ilana Manolson) of Concord, MA, Jonathan Lax of Cordova, TN, and Naomi Katz (Joshua Katz) of Memphis, TN, and her grandchildren Eric Lax, Lena Lax, Hannah Kober, Dahlia Katz, Orli Katz and Mia Katz. The funeral service will take place at her beloved Congregation Ohr Shalom (67 Kent Place Blvd, Summit NJ) at 12:30 PM on Sunday, April 24, and the burial will take place thereafter at Mount Lebanon Cemetery (189 Gill Lane Iselin, NJ). Contributions in Dr. Lax’s memory can be sent to Congregation Ohr Shalom or United Synagogue of Conservative Judaism.

Dr. Judith H. Lax, formerly of Summit, NJ, passed away on April 19, 2022, at her residence in Germantown, TN, surrounded by her family, three weeks shy of her 98th birthday. She was born on May 7, 1924, to Sophie and Isaac Heckelman. Judith... View Obituary & Service Information

The family of Dr. Judith H. Lax created this Life Tributes page to make it easy to share your memories.

Send flowers to the Lax family.