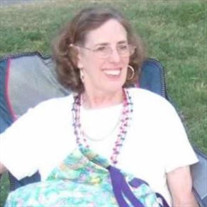 Kay Lohmann Cole Kay Lohmann Cole, wife of Francis Hammond Cole Jr., M.D., died November 4, 2021, after a long illness. She was born June 24, 1943, in Baltimore, MD, to Charles Henry Lohmann and Margaret "Peg" Rosebrook Lohmann and Kay was raised in Milford, PA. She attended George Peabody College in Nashville, TN where she met Hammond Cole, a student at Vanderbilt University. She was an elementary school teacher while Hammond earned his medical degree. His naval and medical career took them to California and Florida and ultimately back to Memphis, where they enjoyed 56 years of marriage. Kay loved fishing, gardening and traveling. She especially loved visiting her children and her grandchildren. Kay was a longtime resident of Central Gardens where she was an active member of Grace-St-Luke's Episcopal Church. Kay was a member of Les Passes, Medical Auxiliary, Daughters of the King and the Altar Guild. Kay and Hammond built their "retirement" home in Shelby Forest complete with fishing pond and joined St. Anne's Episcopal Church in Millington, TN. Kay was well-known for her culinary talents and her sense of humor. She is survived by her husband, Hammond, of Atlanta, GA. She is survived by three children, F. Hammond Cole III (Claire) of Millington, TN, Melinda "Mindy" Cole Pillow (Kenny) of Decatur, GA, and Charles Andrew Cole (Rana) of Kasilof, AK. She also leaves seven grandchildren, William and Samuel "Otto" Cole of Millington, TN, Jackson and Madelyn "Maddie" Pillow of Decatur, GA, and Landon, Lauren and Liam Cole of Kasilof, AK. She was preceded in death by her parents, her brother, Richard Lohmann of Ormond by the Sea, FL and her sister-in-law, Audrey Lohmann of Ormond by the Sea, FL. She is also survived by her sisters-in-law, Elizabeth "Betsy" Cole Beldner (Larry) of Charleston, SC, and Mary Elinor "Mamel" Cole McCain (Shellie) of Memphis as well as by her nephews and nieces, Blair Lohmann (Cindy) of Gainesville, FL, Gary Richard Lohmann (Kim) of Ormond Beach, FL, and Jackie Lohmann Kane (Kevin) of Port Orange, FL, Katherine Beldner Valentine (Kipp) and Matthew Beldner, M.D. (Tara) of Charleston, SC, Wesley (Jenna) McCain of Seattle, WA, and Grier McCain of Charlottesville, VA as well as five great-nieces, great-nephews and a great, great niece. A graveside service will be held at Elmwood Cemetery on Friday November 12, 2021 at 9:30 a.m. In lieu of flowers, the family requests that any donations in Kay's memory be made to the Alzheimer's Association.

The family of Kay Lohmann Cole created this Life Tributes page to make it easy to share your memories.

Send flowers to the Cole family.