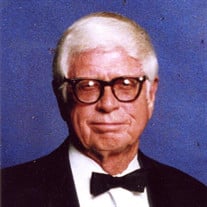 Kenneth W. Markwell, Jr., 96 years old of Memphis, TN, passed away on Thursday March 12, 2020. Mr. Markwell was born in Memphis, graduated from the University of Tennessee, 1952, and was a licensed professional Civil Engineer. Mr. Markwell served in the Army Air Force during WWII, as an aircraft maintenance officer. He was a member of Christ United Methodist Church and a Fellow in the American Society of Civil Engineers. As President of Markwell and Hartz, Inc., he helped build many bridges and water sewage treatment plants across the Southeast. He retired in 2007. He is survived by his lovely wife of 71 years, Helen Morris Markwell, two sons, Kenneth Markwell, III (Ellen) of Germantown, TN and Scott Neely Markwell (Cindy) of Roanoke, VA, and a daughter, Nancy Louise Markwell of Murrieta, CA. He has 6 grandchildren (Kenneth Christopher Markwell, IV, Austyn Swisher, Richard Anthony Markwell, Bryan Nikolaus Markwell, Monica Ford, and Leslie Gabb). He has 10 great-grandchildren. A private family service was held. Burial will be at Bethel Cemetery in Henderson, TX. In lieu of flowers the family has requested that donations be sent to a charity of the donor’s choice or Colonial Park United Methodist Church.

The family of Kenneth W. Markwell Jr. created this Life Tributes page to make it easy to share your memories.

Send flowers to the Markwell family.