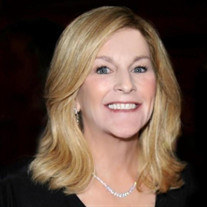 Elizabeth Leigh Fiedler Marek died March 31, 2020. Born in Memphis September 20, 1962, Leigh graduated from The Hutchison School. She was an honor roll student and member of Hutchison academic societies. Leigh was a fierce competitor on the soccer and tennis teams and was Hutchison May Queen. She was an MUS cheerleader and on the MUS football Homecoming court. She attended Vanderbilt University, member of Delta, Delta, Delta sorority and graduated from the University of Alabama. Leigh joined Dunavant Enterprises in Memphis as house paralegal following college. She later moved to Atlanta with a key position in commercial design sales. Returning to Memphis Leigh served as accounting representative for Wolf River Conservancy for eight years, Carnival Memphis and Elmwood Cemetery for the last five years. She is survived by her loving husband, Doug and two children Allie and Paul, the ultimate joys of her life. Leigh’s happiest stage of her life was spent sharing her overwhelming love and time with her family. In October 2018, Leigh and Doug made a decision to make memories of adventure and fun with Allie and Paul. They immediately began to travel. All over! From the Grand Canyon snow to parasailing in the Caribbean, swimming with dolphins in the Atlantic, golfing in Florida, regulars at St Louis Cardinals games, they did it all with love, laughter and fun. Leigh was very high spirited with an outgoing personality and a love of life. She was blessed with so many friends throughout various stages of her life who remained close. A huge recent birthday bash given by a few close friends brought more friends from across the country to help Leigh celebrate her life. She was the life of the party and had more fun than anyone attending the soiree. Her unwavering faith in God, her positive attitude, strength and perseverance exemplify a remarkable example of courage. The family is very thankful for the overwhelming love and abundant support so selflessly given. Leigh is also survived by her mother, Joy Fiedler Kimbrough (Tom), father, Chris Fiedler, Jr. (Bonnie) Houston, TX, brother Chris Fiedler III (Becky) ,nephew Chris Fiedler IV, niece Lucy Fiedler, stepbrothers Tommy Kimbrough,(YuAe), Dallas TX, Keller Kimbrough (Eiko), Boulder CO, uncle Charles Travis (Frances) Greenbriar TN, father-in-law, Paul Marek (Jimmye), sister-in-law Lori Marek of Memphis and a host of cousins and beloved extended family. She was predeceased by her mother-in-law, Rosalie Marek. Leigh was a lifelong member of Second Presbyterian Church where a memorial service will be held at a later date. A private family graveside service will be held at Elmwood Cemetery. The family requests memorials be made to Herb Kosten Pancreatic Cancer Foundation honoring Leigh Marek 6060 Poplar Ave, Suite 140 Memphis,TN 38119 or the charity of the donor’s choice.

Elizabeth Leigh Fiedler Marek died March 31, 2020. Born in Memphis September 20, 1962, Leigh graduated from The Hutchison School. She was an honor roll student and member of Hutchison academic societies. Leigh was a fierce competitor on the... View Obituary & Service Information

The family of Leigh Fiedler Marek created this Life Tributes page to make it easy to share your memories.

Send flowers to the Marek family.