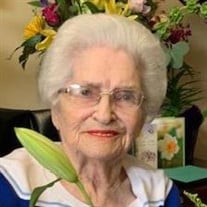 Lois Inez Billings Woods, age 99, passed away peacefully Feb. 10th, 2021 surrounded by family at her home in Germantown, TN. She was born May 2, 1921 in Burlison, TN. Inez, as called by family, was a graduate of Byars Hall High School in Covington, TN. Her lifelong love of sports began at Byars Hall where she played basketball and softball. She came to Memphis to attend Baptist School of Nursing and graduated in 1944. She had a long career as a Registered Nurse working for the US Government beginning at Kennedy Memphis Veterans Hospital. She transferred to The US Army Corps of Engineers as an Occupational Safety and Health Nurse, finishing her career at The Memphis Defense Depot where she retired in 1980. She received multiple commendations for her work and awards for medical devices she invented to improve patient care. She was very proud of her time working as an RN, the friends she made and the opportunities her career opened up to her. She met the love of her life, Joe, while she was a student nurse and he a chef at The Peabody Hotel. Joe and Billie, as he called her, had one daughter, Charlotte. Even though he died in 1966 and left her a young widow she never let any challenge stop her. She drove early model cars before driver’s license were required, fixed almost anything that broke, worked in her gardens, loved to sew and hand made many beautiful clothes, and raised Charlotte through college on her own. She was always busy repairing something or working on a project, but never too busy to help someone who needed assistance. She answered to many names and nicknames –The Big L, Lois, Inez or Billie and each came with its own stories. Having witnessed 99 years of change, she had many interesting stories and everyone cherishes their own with her. She was a member of the Daughters of the American Revolution. As a surprise for her 99th birthday, her nephew Paul Billings completed all the genealogy research to certify her for membership into the DAR. She was sworn in via video conference on her birthday. Inez was a loyal and passionate fan of the University Memphis Tigers, particularly basketball, the Memphis Grizzlies and enjoyed watching all sports. She loved attending games, but in later years was happy to follow the Tigers and Grizzlies via television. She is survived by her loving daughter Charlotte A. Woods of Germantown, TN who cared for her, nephew Paul B. Billings (Karen) of Brentwood, TN, and Stan Billings (Debbie) of West Plains, MO. She was very close to three of her grandnephews and grandniece and their families, Michael Billings (Cassie) of Greenville, NC, Debbie Billings, Knoxville, TN and Ken Billings (Amy), Summerville, SC. In addition to her husband Joe, her parents, Claude and Mabel Billings, she was predeceased by her beloved brother, Alfred Billings, and baby brother, Winford Billings, all of Tipton County. She also leaves behind many other relatives and cherished friends who were like family to her. Due to COVID, there will be no visitation, service will be socially distanced graveside only and open to all that she touched. Graveside services will be 11:00 am Saturday March 6, 2021 at Northridge Woodhaven Cemetery, 6755 Highway 51 North, Millington, TN 38053. To honor her love of animals, the family request any memorials may be made to Memphis Animal Services, 2350 Appling City Cove, Memphis TN 38133.

Lois Inez Billings Woods, age 99, passed away peacefully Feb. 10th, 2021 surrounded by family at her home in Germantown, TN. She was born May 2, 1921 in Burlison, TN. Inez, as called by family, was a graduate of Byars Hall High School in... View Obituary & Service Information

The family of Lois Inez Billings Woods created this Life Tributes page to make it easy to share your memories.

Send flowers to the Woods family.