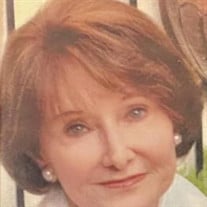 LYN ANN (MARTIN) LIGHTCAP Lyn Ann Lightcap went home to be with her Heavenly Father on December 14, 2021 while surrounded by her loving family. Lyn was born in New Orleans, Louisiana to Mary Edna Joffrion Martin and James Leslie Martin on September 19, 1945. She was raised in Baker, Louisiana and then Baton Rouge, Louisiana where she attended Sacred Heart Elementary, St. Gerard Magella Junior High; and Redemptorist and Istrouma High Schools. She graduated from the University of Southwestern Louisiana in Lafayette with a degree in elementary education. She began her teaching career in New Orleans, where she met her future husband, best friend, and love of her life Charles (Chuck) Lightcap who was visiting New Orleans on a business trip. She and Chuck married in 1969 and they had a long and loving marriage of 50 years before his death in April 2020. Lyn was a devoted mother to Charles (Charlie) Lightcap, and an adoring grandmother to Nicholas Taylor Lightcap (wife Cali) and Chase William Lightcap. Lyn and her sister, Leslie Carpenter, shared a special bond of love and deep friendship. Leslie and Taylor served as Lyn’s caregivers throughout her courageous battle with ovarian cancer and stayed by her side on her journey to Heaven. Lyn was a woman of great faith, kindness and love. Her friendships were many and forever. They were from around the world and around the corner, in her church and in her neighborhood. She had a close spiritual and loving relationship with her Prayer Group and their families, meeting weekly with women from her Cursillo group for over 20 years. She had an extended and loving friendship group near her former home on Snow Lake in Ashland, MS; and she had long term close friends from the Sheboygan, Wisconsin and Jacksonville, Florida areas where she and Chuck lived for many years. Lyn was a devout Catholic. She supported her husband, Chuck, as he completed his formation and was ordained a permanent Deacon for the Diocese of Memphis in Tennessee. Together they shared a faithful devotion to the Catholic church and especially to St. Francis of Assisi in Cordova, TN. Lyn was active in various church ministries. She was a fierce advocate for the unborn and for people often neglected by others. She served in a prison ministry and regularly prepared meals for the homeless and hungry. She was an active member of Birthright. Lyn was passionate about teaching children and spent many years teaching at Catholic schools in Sheboygan, Wisconsin; and later volunteering as a tutor and mentor at schools in Ashland, Mississippi and the Collierville, TN area. Lyn was a wonderful cook, a gracious hostess, a rescuer of abandoned animals, a gifted home decorator, an avid reader, a football fan and a dancer extraordinaire. She loved to travel —-including pilgrimages to Fatima, Lourdes and Medjorge, beach trips with her prayer group, America’s Cup Sailing trips and around the world travel with Chuck. Lyn is survived and will be deeply missed by her grandsons Taylor and Chase, sister Leslie, brothers Ty Alsup (wife Traci) and David Alsup (wife Rose), nephew Todd Nordby (wife Patricia), niece Kari Lyn Armijo (husband James); great nephews Adam Nordby, Henry Armijo, and Sam Armijo; and great niece Kayli Nordby. She is also survived by 9 first cousins and their families —many of whom live in the Pensacola, Florida area. She was preceded in death by her husband, Chuck, son Charlie, and infant daughter Amy Elizabeth. Lyn is further survived by members of the Lightcap family, including Chuck’s brother Pete and his three sisters, Terry, Patrice, Meg and their families. The family wishes to extend special thanks to the clergy brotherhood in the Diocese of Memphis, Tennessee; to the Kohler family, Windway Capital Corp., the Vollrath Company, North Sails, and the Kohler Company. In lieu of flowers, the family suggests donations be made in Lyn’s memory to St. Francis of Assisi Catholic Church in Cordova, TN 38016 or to St. Francis Elementary School, 2100 Germantown Pkwy, Cordova, TN 38017. Lyn will be interred with her husband, Chuck, at Calvary Cemetery in Memphis, TN. Services will be held at a later date. An announcement will be published when details are finalized.

The family of Lyn Ann Martin Lightcap created this Life Tributes page to make it easy to share your memories.

Send flowers to the Lightcap family.