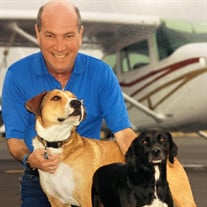 Malcolm "Jay" King, 62, died on May 31, 2022. He is survived by his daughter, Celia King, his brother Ronnie (Pam) King and his two sisters, Fran (Steve) Twersky and Terri King. He was preceded in death by his parents, Arthur and Rosalind Rosenblum King, and his beloved son, David Marsh King, who died on January 9, 2011. He is also survived by numerous nieces and nephews whom he loved very much, cousins who were like brothers and sisters to him, and his aunt, Maureen Rosenblum. Jay was born on November 22, 1959 in New Orleans, Louisiana where he lived until the family moved to Memphis in 1974. He graduated from Germantown High School and was President of Okeon AZA. He obtained his Bachelor of Science degree in accounting from the University of Memphis in 1983. Jay worked as CFO with his family business, Designer Optical. Jay began flight lessons and soon after, he purchased the flight school, Downtown Aviation. With his entrepreneurial spirit, leadership and passion, “Jay Air” was born. The flight school has grown to become the biggest and best flight school in the area and Jay is beloved in the aviation community. Jay had many passions in his life. He loved flying, boating, fishing, skiing, traveling, family and rescuing people and dogs. His greatest love was for his children, Celia and David. Jay was known by all as a sweet, kind soul who would help anyone in need. Jay was an amazing man who will be sorely missed by all who knew him. Funeral services will be 10:00 a.m. Friday, June 3,·2022 at the Sam Abraham Chapel in Baron Hirsch Cemetery, 1499 Rozelle Street, Memphis, Tennessee 38106. The family would ask that family and friends make donations to K9 Air Rescue, Memphis Humane Society and Baron Hirsch Synagogue or a charity of their choice in lieu of flowers.

Malcolm "Jay" King, 62, died on May 31, 2022. He is survived by his daughter, Celia King, his brother Ronnie (Pam) King and his two sisters, Fran (Steve) Twersky and Terri King. He was preceded in death by his parents, Arthur and Rosalind Rosenblum... View Obituary & Service Information

The family of Malcolm "Jay" King created this Life Tributes page to make it easy to share your memories.

Send flowers to the King family.