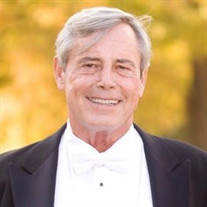 Malcolm Barboro Wood, 68, died on November 2, 2019, after a brief illness. The son of the late Julia Barboro Wood and Percy Russell Wood, Malcolm was born on October 26, 1951. He attended Memphis University School and the University of Alabama. He returned to Memphis where he spent his career as the fourth-generation owner of A.S. Barboro, Inc. Malcolm loved the outdoors, and you would often find him outside working on his farm or tending to his garden. He loved hunting, fishing, and all forms of wildlife. Malcolm’s greatest joy in life was his wife, Mary, to whom he was married for 40 years, and he enjoyed nothing more than spending time with his family, especially his five grandchildren. Malcolm will surely be missed by his greatly loved friends from the card room at the Memphis Country Club. A lifelong Memphian, Malcolm served as a board member for Memphis Museums, Inc. and Livitup, Inc. (formerly United Cerebral Palsy of the Mid-South), and he was a past Chair of the Tennessee Malt Beverage Association. Malcolm was a kind and loyal soul who will be deeply missed and fondly remembered. He is survived by his wife, Mary McCormick Wood; three children, Russell Wood Chambliss (Beau), Ruth Wood Garrett (Andy), and Malcolm Barboro Wood, Jr.; and his grandchildren, Julia, Charlotte, and Lucy Chambliss and Harvey and June Garrett. He is also survived by his sisters, Julia Wood Hussey (Edwin) and Ruth Wood (John Strasenburgh); his sisters-in-law, Anne Covington (Stansill) and Jane McHann (Phillip); and nieces and nephew, Shea Lackie (Josh), Curry Del Pozzo (Michael), Annesley Hussey, Emily Sharpe, Elizabeth Zanca (Peter), Caroline Skees (Taylor), and Christian Graves, along with many dear friends and family members. He was predeceased by a daughter, Amelia Russell Wood, and his dear friend, John Curtis. While not kin, the Curtis family was and remains an integral part of the Wood family. A funeral mass will be held at 1:30 p.m., Thursday, November 7, at St. Peter Catholic Church, with burial to follow at Elmwood Cemetery. If desired, memorials may be made to St. Peter Catholic Church, 190 Adams Avenue, Memphis, TN 38103 or Church Health, 1350 Concourse Avenue Suite 142, Memphis, TN 38104.

Malcolm Barboro Wood, 68, died on November 2, 2019, after a brief illness. The son of the late Julia Barboro Wood and Percy Russell Wood, Malcolm was born on October 26, 1951. He attended Memphis University School and the University of Alabama.... View Obituary & Service Information

The family of Malcolm Barboro Wood created this Life Tributes page to make it easy to share your memories.

Send flowers to the Wood family.