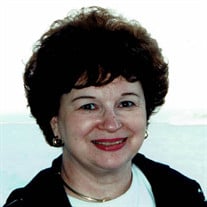 Marcia Bluestein Notowich, 79, passed away peacefully on September 18, 2021, after a long struggle with the after affects of a stroke in 2009. She resided at The Memphis Jewish Home since then, where the staff lovingly cared for her in an exemplary manner. She was the treasured wife of Alvin Notowich for 59 years. They were childhood sweethearts for five years, before marrying in 1962. She is survived by her children, Sarna Notowich and Sam (Lauren) Notowich, and her grandchildren, Jake Notowich, Chloe Notowich, and Brooke Notowich. She was the daughter of Edward and Madeleine Bluestein, and the sister of Myra (Murray) Alperin, and Patricia Zeitlin (Donald) of blessed memory. Marcia was born in Memphis, and attended Central High School. After marriage, they moved to Nashville, where she worked while he attended Vanderbilt University. After his graduation, they moved to Memphis for a few years, and then moved to Pittsburgh, and Milwaukee, and returned to Memphis in 1970. When Alvin started a new business with his brother, Herbert Notowich, and another partner, Larry Welch. Marcia actually chose the name, Plastico, for the company. Marcia had numerous talents including art, clothing design, needlepoint, crocheting, cooking and baking. She joined with Carol Lipman, for five years, in a dessert catering business named “Straight From The Oven”. Above all, she was the paramount wife, mother, and grandmother. She taught many people many of her skills, and was a friend to all. She was an active member of the Beth Sholom Synagogue Sisterhood, and a member of Hadassah. She and Alvin were the first couple to be married at Beth Sholom. She was buried at the Anshei Sphard Synagogue Cemetery on September 19, 2021. The family requests donations be made to The Memphis Jewish Home & Rehab, Beth Sholom Synagogue, the Anshei Sphard Synagogue Cemetery Fund, or a charity of the donor’s choice.

Marcia Bluestein Notowich, 79, passed away peacefully on September 18, 2021, after a long struggle with the after affects of a stroke in 2009. She resided at The Memphis Jewish Home since then, where the staff lovingly cared for her in an exemplary... View Obituary & Service Information

The family of Marcia Bluestein Notowich created this Life Tributes page to make it easy to share your memories.

Send flowers to the Notowich family.