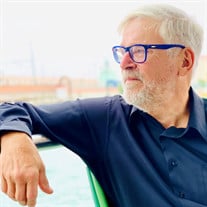 MARK STEVEN GRAWEMEYER, born on November 5, 1954, in Jackson, Mississippi, departed this life on November 30, 2021, in his beloved South Main community. Working downtown Memphis since 1974, he is remembered as one of the early redevelopers of the South Main Historical District, which he served many years as President. Aside from being a Developer, Mark worked at Memphis Light Gas and Water for nearly 40 years as an Engineer in the Gas Department. He prided himself on being an Eagle Scout and was certified as a Life Scout. He attended Graves Elementary, Grahamwood Elementary, Whitehaven High School, and the University of Memphis. He was a lifelong member of the United Methodist Church and served faithfully throughout his life in various leadership roles and outreach. Mark was the youngest son of Adolph Elmer and Annalee Gunn Grawemeyer, and is survived by his brother Paul Grawemeyer of New York, NY; sister Susan Ivey (Claude) of Tallahassee, Fl; his wife Cynthia Matthews Grawemeyer; daughters Courtney Vandiver (Jacob) of Vancouver, British Columbia; Emily Alagic (Mirza) of Jackson, Tennessee; Olivia Thomas of Memphis, TN; and Leah Friddle (Jake) of Dallas, Texas; along with five grandchildren which he adored: Sam, Maddyx, Penelope, Poppy, and Noah as well as one niece, two nephews, two great nieces, and his beloved poodle Asta. Services will be held on Sunday, December 19th, 2021, at 3:00 p.m. at Centenary United Methodist Church, 584 E. McLemore Avenue, Memphis, Tennessee officiated by Rev. Roger A. Hopson, Senior Pastor and assisted by Rev. Carla Whitehorn. Immediately following the service there will be a Celebration of Life at 108 G.E. Patterson Ave, Memphis, Tennessee.

MARK STEVEN GRAWEMEYER, born on November 5, 1954, in Jackson, Mississippi, departed this life on November 30, 2021, in his beloved South Main community. Working downtown Memphis since 1974, he is remembered as one of the early redevelopers... View Obituary & Service Information

The family of Mark Steven Grawemeyer created this Life Tributes page to make it easy to share your memories.

Send flowers to the Grawemeyer family.