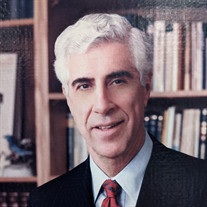 Marlin Merle Graber, 89, of Memphis, Tennessee passed away peacefully on Tuesday, November 8, 2021. Marlin was born on September 24, 1932 in St. Louis, Missouri to Louis and Sarah Graber. The family lived in Sikeston, Missouri. where his father owned and managed their dry goods store. In 1947, the family moved to Memphis. Marlin attended 9th Grade at the Kentucky Military Institute thereafter attending and graduating from Central High School in Memphis. It was during this time he met his wife of 68 years, Evelyn Margolin. After high school he briefly attended Vanderbilt University then transferred to the University of Tennessee in Knoxville where he graduated with a degree in business law. Marlin joined R.O.T.C. in college and entered the United States Army in 1954 as a Second Lieutenant. After two years of military service Marlin, his young wife and infant son settled in Memphis. He went to work for his father-in-law, Joseph Margolin and his brothers Ben and Sam Margolin at first building homes. A short time later Marlin began to manage the originations department of their mortgage division, National Mortgage Company, and held that post until the company's sale in 1995. Marlin was very much involved in communal affairs. He served on the executive board of the Memphis Jewish Foundation, President of the Margolin Hebrew Academy and President of Baron Hirsch Congregation. He also served as president of the Memphis Mortgage Bankers Association and as a Director of the Tennessee Mortgage Bankers Association. In addition to his wife he leaves four sons. Steve (Esther) Graber of New York City, Larry (Teri) Graber of Memphis, Glenn (Pammy) Graber of Woodmere, NY and Roy (Tova) Graber of Memphis. He is survived by eighteen grandchildren and numerous great grandchildren. He was preceded in death by his only sibling, Lorraine Graber Kolker. He is also survived by his nieces Randee Kolker Smolensky, Marsha Kolker Boxerman and Nancy Kolker McIntyre. The family requests that in lieu of flowers contributions be made to the Margolin Hebrew Academy or the Baron Hirsch Congregation.

Marlin Merle Graber, 89, of Memphis, Tennessee passed away peacefully on Tuesday, November 8, 2021. Marlin was born on September 24, 1932 in St. Louis, Missouri to Louis and Sarah Graber. The family lived in Sikeston, Missouri. where his... View Obituary & Service Information

The family of Marlin Merle Graber created this Life Tributes page to make it easy to share your memories.

Send flowers to the Graber family.