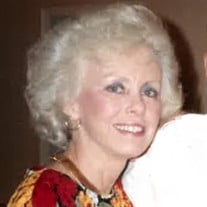 Martha Folk Drennon Crabtree passed away on Easter Sunday, April 12, 2020, after gracefully enduring the long, gradual progression of Alzheimer’s disease. Martha was born on August 20, 1931 in Memphis, Tennessee the daughter of Humphrey Estes Folk, Sr. and Martha Rodgers Folk. Martha graduated from the Hutchison School and attended Ward-Belmont College for young women in Nashville, Tennessee. Upon becoming a teenager, Martha developed her passion for horseback riding. Martha and her Tennessee walking horses, Tickle Toes and Midnight Rose, competed throughout the South from Memphis to Dallas to New Orleans to Shelbyville. During these years she would soon meet C. Cleveland Drennon, Jr., the love of her life, whom she married in August, 1952. Needless to say, throughout Martha’s life she had a love for fashion. Martha and her lifelong dear friend, Deeda Withers, worked together at Minor-Francis for years. Martha left Minor-Francis and partnered with another dear friend, Julia Donelson, opening their own clothing store in 1969 under the name La Boutique. Julia later married and moved from Memphis, but Martha continued operating La Boutique on her own and then with her brother, Humphrey Estes Folk, Jr., until 1989. Tragedy struck not long after the sale of La Boutique when Cleve became terminally ill with cancer and passed away on January 5, 1990 at the young age of 58. Martha and Cleve had been married for over 37 years. Following Cleve’s death, Martha married J. Scott Crabtree in 1992. Scott, a lifelong friend of both Martha and Cleve, had been one of the few persons Martha had ever dated besides Cleve and had also been a groomsman in their wedding. Scott was living in Atlanta so this began a new and wonderful life for Martha in Atlanta with Scott. Although tragedy struck again with the death of Scott in 1997, Martha remained in Atlanta since it was equally distant between her two children and also due to her deeply devoted dear “Lunch Bunch” friends, Lou Post, Laura Wallace, Bonnie Adler, Nancy Lynn, Nancy Green, Jane Wheeler and Rene Nalley, to whom she was also deeply devoted. In March, 2018, as the Alzheimer’s disease continued its slow progression it ultimately became time for Martha to come home to Memphis where she was admitted to the Allen Morgan Health and Rehabilitation Center at Trezevant and resided until her death. Martha was a member of the Memphis and Atlanta Junior League and a member of the Piedmont Driving Club. Martha, a very kind, generous, elegant and lovely lady, was truly loved by all who knew her. Martha, we love you and will always miss so you very much. Martha was preceded in death by her parents, Humphrey Estes Folk, Sr. and Martha Rodgers Folk, and also by her only sibling, Humphrey Estes Folk, Jr. Martha is survived by her daughter, Catharine Drennon Reed (Marvin Alf Reed) of Wilson, North Carolina, and by her son, Charles (Chuck) Cleveland Drennon, III (Amy Adams Drennon) of Memphis; by her four grandchildren, Catharine’s children, Marvin Alf Reed, Jr. of Richmond, Virginia and Andrew Cleveland Reed (Sara Bowers Reed) of Columbia, South Carolina, and Chuck’s children, Charles Cleveland Drennon, IV and Weller Adams Drennon both of Memphis; and by her five great-grandchildren, Sara and Andrew’s children, Catharine Drennon Reed, Charlotte West Reed, Susan McMillan Reed, Andrew Cleveland Reed, Jr. and Harriet Ruth Reed. The family would like to express their deepest appreciation for Martha’s caregivers in Atlanta especially Lashenia Jones and Ola Loye and for her sitter, Karen Dotson, as well as all of the other wonderful nurses and attendants at Trezevant. As a consequence of COVID 19, only a private family graveside service was held at Calvary Cemetery on Friday, April 17, 2020 being officiated by Rev. Augustine DeArmand, Pastor of St. Peter Catholic Church, Memphis. The family requests any memorial contributions be made to the Alzheimer’s Foundation of America, 322 8th Avenue, New York, New York 10001, Christ the King Catholic Cathedral, 2699 Peachtree Road, Atlanta, Georgia 30305, St. Peter Catholic Church, 190 Adams Avenue, Memphis, Tennessee 38119 or any charity of your choice.

The family of Martha Folk Drennon Crabtree created this Life Tributes page to make it easy to share your memories.

Send flowers to the Crabtree family.