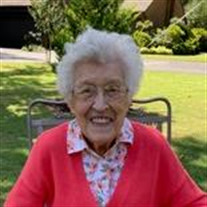 MARTHA BURNETT FARRIMOND (9/20/1917 - 4/11/2021) Martha Burnett Farrimond, born on September 20, 1917 to the late James Allison Burnett and Candus Baxley Burnett, died peacefully on April 11, 2021. The daughter of a steamboat captain, Martha was born into a world before automobiles, airplanes, movies, and penicillin. She grew up and attended school in Helena, AR and had vivid memories of bringing her father lunch, during the Great Mississippi River Flood of 1927, and looking up to see his steamboat above the bluff. After high school, Martha moved to Memphis, attended school to learn bookkeeping and worked at the Firestone Tire and Rubber Company, which, at one time, was the largest employer in Memphis. She is the last of a group of many lifelong friends that she made there. One of those friends introduced Martha Burnett to the late William Farrimond in 1941, and they enjoyed a lively courtship at places such as the Peabody Skyway, Pig ’N Whistle, and Fortune’s Jungle Gardens before marrying in 1942. Bill and Martha raised three daughters, Martha Dale Farrimond, the late Jane Farrimond Keltner, and Sally Farrimond Chandler. Martha was a longtime member of The Church of the Holy Communion and the All Saints Guild, and, at the time of her death, was Holy Communion’s oldest communicate. She was a member of PEO Chapter A. Nothing was more important to Martha than spending time with her family, including her children, four grandchildren Allison Musick, Stephen Keltner, Louise Biedenharn, and John Chandler, and three great-grandchildren Dorothy, William, and Lucia. Martha and Bill enjoyed both business and leisure travel and often had a grandchild or two in tow. Their favorite spot was the Destin or 30A area, where they planned annual, family beach vacations. Martha's love of family was evident throughout her life. Martha treasured her last home at Trezevant Manor, where she resided since 1999 and remained in an independent living apartment until shortly before her death. She was blessed with dear friends and caregivers at Trezevant Manor. A voracious reader, Martha’s name could be found at the top of the waiting list for new books coming to the Trezevant Manor library, as she had read most of the library’s collection during her 22 year residency. Martha enjoyed remarkably good health over a very long, full life. In addition to her parents, late husband William, and daughter Jane, Martha was preceded in death by her two brothers James A. Burnett Jr. and William Garland Burnett, as well as her sister Mary Jane Burnett Sperry. On Thursday, April 15, the family will meet for a private, graveside service, and a memorial service will follow at the St. Edward's Chapel at Trezevant Manor, which will be open to residents of Trezevant Manor. Both services will be officiated by her grandson-in-law, The Reverend James P. Biedenharn III. In lieu of flowers, Martha wished that memorials be directed to Church Health, a place she volunteered for over eight years, or to The Friends of Music Fund of St. Edward's Chapel at Trezevant Manor.

The family of Martha Burnett Farrimond created this Life Tributes page to make it easy to share your memories.

Send flowers to the Farrimond family.