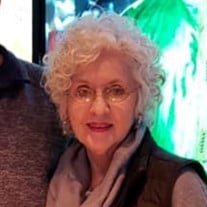 Mary Elizabeth Webb Bowman, 72, of Southaven, Mississippi, passed away peacefully at home on the morning of January 11, 2021. She was born on July 22, 1948 in Fort Smith, Arkansas, to Byron and Jewell Webb. Elizabeth was an active member of Calvary Baptist Church and a graduate of Northside High School in Fort Smith. She was married to Fred Bowman of Fort Smith on August 9, 1970. They were happily married for over 36 years before Fred’s passing in 2007. They relocated to Memphis, Tennessee, in 1973, shortly after the birth of their son, Chris. In Memphis and later Southaven, Elizabeth became a homemaker and mother of two after the birth of their daughter, Amy, in 1976. She became an active member of Broadway Baptist Church and served faithfully until her passing. She had a love for antiques and became a dealer. She enjoyed playing tennis and joined a team of ladies who became longtime friends. She had several great friends from Broadway who formed a tight-knit group that regularly ate together, traveled together, encouraged, and prayed for each other. Elizabeth was a cherished friend to many, and many felt the same about her. She loved her husband, children, and later her grandkids with all her heart, and we loved her too. Elizabeth was preceded in death by her husband, Fred Bowman, her parents, Byron and Jewell Webb, her brother Darrell Webb, and many family and friends who joyously welcomed her into Heaven. She is survived by her sister Eleanor Moore of Fair Oaks, California, her son Chris Bowman of Southaven, her daughter Amy Lawler and husband Todd Lawler of Southaven, her grandchildren Colton and Annabeth Lawler, and many family and friends who cherish her memory and her love. A celebration of her life and love will be held Sunday, January 17, 2021, at Broadway Baptist Church. Visitation will begin at 2pm, and the service at 4pm. Her interment will be at the West Tennessee State Veterans Cemetery in Memphis on Thursday, January 21, 2021, at 9am. In lieu of flowers, memorial gifts can be made to Broadway Baptist Church.

Mary Elizabeth Webb Bowman, 72, of Southaven, Mississippi, passed away peacefully at home on the morning of January 11, 2021. She was born on July 22, 1948 in Fort Smith, Arkansas, to Byron and Jewell Webb. Elizabeth was an active member of... View Obituary & Service Information

The family of Mary Elizabeth Webb Bowman created this Life Tributes page to make it easy to share your memories.

Send flowers to the Bowman family.