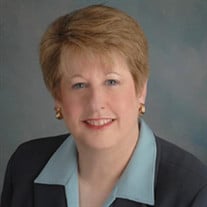 Mary F. Sharp, age 71, departed this life on Saturday, August 29, 2020 at Baptist Reynolds Hospice House in Collierville, TN. Mary was born in Aurora, IL on May 21, 1949. Mary attended University of Memphis where she earned both her BBA in Finance and MS in Real Estate Development. She later served as an adjunct faculty member in the Fogelman College of Business at the University. She retired as the CBRE Alliance Director for Baptist Memorial Healthcare in Memphis. Previously, she held several positions with CBRE/Memphis, most recently as Chief Operating Officer and leader of Asset Services. In 2012, Mary was named a Memphis Business Journal Top 25 Superwoman in Business. A devoted member of St. Peter’s Church in Memphis, TN, she served as a Eucharistic minister and member of the building committee. She was active in her community including serving in several positions in the local, county, and state PTA and as a Board Chairman of the Mid-South Chapter of the American Red Cross. She was preceded in death by her parents Fred and Emme Linden and a sister, Suzanne Linden. Mary is survived by her husband of 49 years, Jerry Sharp; daughter Amy Hiller (Tim) of Columbus, MS; son Jeremy Sharp (Zoe) of Washington DC; brother Nicholas Linden of McFarland, WI; sister Janet Cooper (David) of Austin, TX; four grandchildren, Jack Hiller, Megan Hiller, Emme Sharp, & Henry Sharp; and numerous beloved nieces and nephews. A private family mass will be held at a future date at St. Peter’s Catholic Church in Memphis, TN followed by internment in the church columbarium. Memorial contributions may be made to Baptist Reynolds Hospice House, the American Red Cross or the Wings Foundation at West Cancer Center in Memphis.

Mary F. Sharp, age 71, departed this life on Saturday, August 29, 2020 at Baptist Reynolds Hospice House in Collierville, TN. Mary was born in Aurora, IL on May 21, 1949. Mary attended University of Memphis where she earned both her BBA in... View Obituary & Service Information

The family of Mary F. Sharp created this Life Tributes page to make it easy to share your memories.

Send flowers to the Sharp family.