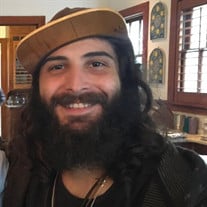 Mason Paul Gudelsky passed away unexpectedly on April 30th, 2020. He took his own life at his home in Memphis, Tennessee. He was 28 years old. Mason is survived by his mother, Louise Palazola, his stepfather, Joseph Townsend, of Memphis; his sisters Mia Townsend, of Memphis, and Eileen Townsend, of New York; his paternal grandparents Erwin Gudelsky, of Washington D.C., and Harriet Silverman, of Tucson; maternal grandmother Josephine Palazola, of Memphis; as well as his large family of loving cousins, uncles, and aunts. He is preceded in death by his father, Harris Paul Gudelsky. Mason was born on November 13th, 1991 in Poway, California to Paul and Louise. As a young child, he lived in San Diego, California, but spent most of his life in Memphis, Tennessee. Mason never met a dull moment; if it would make life more exciting, Mason embraced it: As a kid, he loved snowboarding and skateboarding, scaling trees, doing backflips, and playing with his dogs. He attended elementary school at Grace St. Luke’s and celebrated his Bar Mitzvah at Temple Israel in 2004. As a teenager, he developed his lifelong love of live music and made a large circle of friends who embraced life as much as he did. He moved to Boulder, Colorado to attend college and fell in love with the mountains. In Boulder, he had many adventures that made for wild stories. He was always gregarious, hilarious, and a true follower of his own path. As an adult, Mason moved back to Memphis and took up farming. He always had a project in the works, and never took “no” for an answer, whether the task at hand was adopting a coatimundi, making jewelry, or starting a blueberry farm. He loved to travel to concerts, spend time with his three dogs (Riley, Jack, and Samson), talk about big ideas, and be in nature. He was an amazing brother; a loving son, grandson, nephew, and cousin; one of the most exciting and caring friends you could ask for; and a completely original presence. Mason inspired us all to be true to ourselves. He will be incredibly missed, and his memory will always be a blessing to us. He will be laid to rest at Memorial Park Cemetery in Memphis in a private ceremony. Donations in Mason’s memory can be made to the Mid-South Food Bank.

Mason Paul Gudelsky passed away unexpectedly on April 30th, 2020. He took his own life at his home in Memphis, Tennessee. He was 28 years old. Mason is survived by his mother, Louise Palazola, his stepfather, Joseph Townsend, of Memphis; his... View Obituary & Service Information

The family of Mason Paul Gudelsky created this Life Tributes page to make it easy to share your memories.

Send flowers to the Gudelsky family.