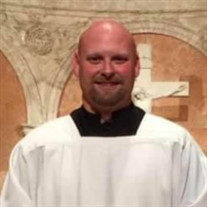 Sir Knight Matthew Aaron Sorg passed away Monday, January 4, 2021 at the age of 46 of a pulmonary embolism caused by the novel coronavirus. He is survived by his wife, Amy; daughters, Alexis and Jessica; his mother, Bonnie Weber; sister, Jennifer North; and brother, T.K. Baker and many other extended family and friends. Matthew graduated from Southaven High School at the top of his class. He was captain of the Knowledge Bowl Team, in honors classes, in the ROTC program, he was also in track and theatre and many other school programs. He attended Mississippi State for a while, but later decided to be a diesel mechanic and he worked with his late step-father, Johnny Weber, for many years. He then continued working for his family friend, Don Ward, at Big T Trucking. If Matthew was not working on big trucks, he was at church. Matthew’s home parish was the Cathedral of the Immaculate Conception, but he could be found just about anywhere in the diocese of Memphis with Bishop Talley and his crew. Matthew was into his first year of the diaconate program and he was ecstatic about becoming a deacon. He has played so many roles in the church. He was a Master of Ceremonies, Altar Server Coordinator, Lector, and Eucharistic Minister just to name a few. Matthew also helped with the renovations to the Marian Hall Conference Room, Rectory, and the new parish offices at the Cathedral. Matthew was also a 4th Degree member of the Knights of Columbus Council 616 and served as Grand Knight and Faithful Navigator for many years. He was also very passionate about helping the seminarians and became close friends with many of them. He helped coordinate many of the Knight of Columbus’ Annual Seminarian Dinner Auctions. If a job needed to be done, Matthew was there to get it done. If anyone needed anything, he was there to give it. His passing has left a huge whole in the heart of the diocese and church. He will be greatly missed by the many lives that he touched. Visitation services were held Tuesday evening, January 12th from 5pm - 6:30pm with a rosary at 6:30pm and the funeral service was Wednesday morning, January 13th at 10am at the Cathedral of the Immaculate Conception. He was laid to rest at Calvary Cemetery. Due to Covid-19 space limitations, Mass was live-streamed on the Cathedral of the Immaculate Conception’s Facebook pag In lieu of flowers, the family asks that you consider making a donation to the Seminarian Fund in Matthew’s name by contacting the Catholic Diocese of Memphis.

Sir Knight Matthew Aaron Sorg passed away Monday, January 4, 2021 at the age of 46 of a pulmonary embolism caused by the novel coronavirus. He is survived by his wife, Amy; daughters, Alexis and Jessica; his mother, Bonnie Weber; sister, Jennifer... View Obituary & Service Information

The family of Matthew Aaron Sorg created this Life Tributes page to make it easy to share your memories.

Send flowers to the Sorg family.