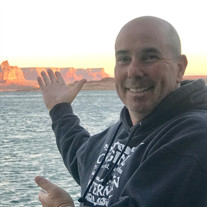 On Sunday, April 26, 2020, Michael Davis Ballard, loving husband, brother, uncle, and friend died after a valiant and determined fight against cancer. Michael was born in Jackson, MS on October 10, 1970. He grew up in Dorsey, MS where he was active with the youth at Hopewell Baptist Church. He attended Dorsey Grammar School and graduated from Itawamba Agricultural High School in 1988 where he was an active member of the band. He attended Itawamba Community College and continued his education at Ole Miss earning an undergraduate and graduate degree. Throughout his career, he pursued his passions in parks and recreation working in Tupelo, MS, Germantown, TN, Asheville, NC, Clinton, MS and, eventually, returning to Memphis, TN to manage the pools at the University of Memphis. Known to many as “Ped”, “Aquaman”, “Tadpole”, or the “Pool Whisperer”, Michael lived his life loving the outdoors, seeking adventure (planned and unplanned), mentoring young lifeguards, coaching athletes of all ages, and sharing his larger than life smile, witty sense of humor, and contagiously unique laugh. He loved long bike rides, triathlons, swimming, dill pickles, telling stories, and listening to music with friends. A dog lover and closet cat friend, he was accompanied throughout life by numerous animals including Muddy, Dougal, Duke, Tanner and Max(ine) the cat. For the past nine years, he stubbornly raged against cancer, maintaining his wittiness and never relenting, defying the odds for as long as he could muster. Michael was preceded in death by his mom, Ernestine, and dad, James. He is survived by his wife, Andrea, two brothers, Ed (Susan) and Allen (Donna), several nieces, nephews, aunts and uncles, along with countless other friends and family who were better for knowing him. Michael requested to be cremated or have his body donated to science. With the recent pandemic, cremation was chosen. In addition, due to the current pandemic and limitations on social gatherings, a memorial service will be planned for a later date to reminisce and celebrate his lasting impact on our lives. That date will be announced through the PostHope site at posthope.org/teamballard. In lieu of flowers, the family suggests donations to the Michael Ballard Aquatic Fund at www.sgis.org/give, as swimming and anything to do with water made him smile or to the Cancer Card xChange, a charity that he benefited from during his illness, at www.cancercardxchange.org/donate/.

On Sunday, April 26, 2020, Michael Davis Ballard, loving husband, brother, uncle, and friend died after a valiant and determined fight against cancer. Michael was born in Jackson, MS on October 10, 1970. He grew up in Dorsey, MS where he... View Obituary & Service Information

The family of Michael Davis Ballard created this Life Tributes page to make it easy to share your memories.

Send flowers to the Ballard family.